Where Vermont’s Next Six Cannabis Dispensaries Should Be Located 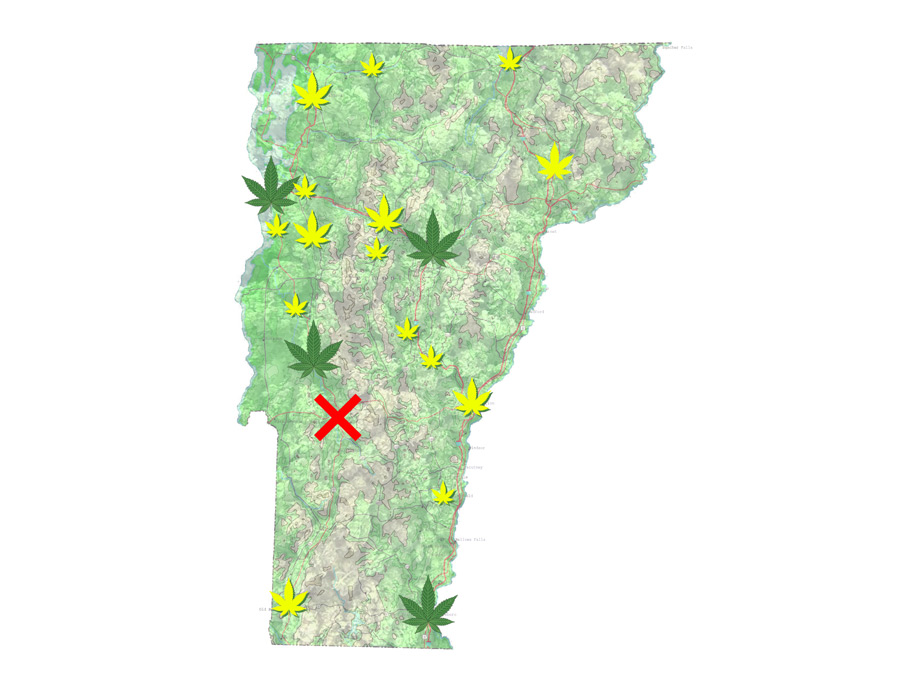 EAST BURKE, Vt. — While Vermonters (and the rest of the country) were watching the Vermont State House last week for what turned out to be a historic legalization/regulation vote, an arguably even more important cannabis law was being passed, S.16.

Unlike its more famous mainstream cousin, S.16 is a bill that makes significant reforms to the state’s medical marijuana program, which was first created with the passage of S.76 in 2004 and until last year, has been one of the nation’s most conservative programs. Last year Vermont’s medical program earned a D+ grade from American’s for Safe Access, a national medical marijuana advocacy organization.

While patient numbers have steadily climbed since the 2016 bill S.14 (thanks to the addition of chronic pain as a qualifying symptom), this year’s additional reforms from S.16 will not only result in more patients, but also more locations for registered patients to purchase their medical marijuana.

Specifically, there will be one new dispensary license issued (bringing the total to five license holders) and each license holder will be allowed to have up to two retail locations, meaning ten total possible locations for legally selling medical marijuana over the counter.

With four existing dispensary locations, this means that there will be six new locations that will open up in the next few years. Not only will these dispensaries serve the growing number of registered medical marijuana patients, but as with other states, these dispensaries will be the first (and maybe only) to sell regulated cannabis to the entire adult use market.

Here are the factors that were considered in making this list:

If it weren’t for Bennington Senator Dick Sears and the advocacy of patients, would-be patients, and would-be dispensary operators, there might not be any new dispensaries at all. As one of only seven Vermont cities/towns with a five-figure population, there’s undoubtedly demand; however, the closest nearby dispensaries either 90 minutes north to Brandon, or over the mountain to Brattleboro (Rt. 9 in the winter? No thanks), the region is indeed underserved. Even with a lower number of registered patients presently, advocates have successfully made the case that many more patients will register if they have a local option.

Bennington is a major tourism crossroads with an eager and appealing downtown area that would benefit enormously from the  New York and southern New England tourists driving to ski and stay in southern Vermont.

Presently, any patient (or potential patient) that lives north of St. Johnsbury must drive at least 1-2 hours to Montpelier or Burlington to visit an existing dispensary. The northeast kingdom is large in size, but small in population, so any location should be a hub through which NEK residents and commuters will pass (why Lyndonville is more favorable than Newport) or can easily access, ideally close to I-91.

Politically, the entire kingdom is fairly conservative with politicians more likely to side with police than patients, but Senator Joe Benning (R-Caledonia) has been a bright spot as a libertarian-leaning attorney who would rather regulate than incarcerate. It’s unknown if the town would get on board, but a vocal student population at Lyndon State (Northern Vermont University – Lyndon) and the need for economic activity might help tip the scales.

It’s pretty obvious that Chittenden County should get another location based on population, but exactly where that location would be is unknown  – the dispensary operators in Burlington have already successfully prevented competition from coming into Williston, so there will be obstacles on top of the high costs of being in Burlington.

The eastern part of Chittenden County would not only serve the patients between Burlington and Montpelier, but Hinesburg could also attract patients from Route 7 suburbs and has access to Interstate 89. Politically, Hinesburg wouldn’t necessarily be ideal except that it’s the home of the state’s most politically significant and steadfast advocate, Lt. Governor David Zuckerman.

Windham and Windsor counties have the #2 and #4 largest existing medical marijuana patient populations, but the only present options are driving south to Brattleboro or north to Montpelier, so the entire Upper Valley region would benefit from a dispensary location.

The proximity to Hanover, New Hampshire (the 8th largest city in Vermont) and the location as the Interstate 89 gateway to Vermont from would be ideal for future adult use market, and in the meantime, patients who technically live in Vermont but have medical marijuana cards issued by New Hampshire doctors would have a reason to switch to registering as Vermont patients.

Other nearby options: Woodstock (travel hub, tourism nexus, wealthy and aging demographics who would participate and benefit); Randolph (Vermont Technical College been discussed as a potential testing partner for state, regional political support including prominent advocates from VT Law School, access to Interstate 89).

There’s already legal medical marijuana activity in the Mad River Valley in the form of a cultivation center for the Montpelier dispensary — only a 30 minute drive from Waterbury and most parts of the Valley — but a retail location close to exit 10 would not only serve the Sugarbush side of the Valley, but also the Stowe side.

Although there’s not a lot of public political support, these areas have high populations of very active older Vermonters (including second homeowners) who might be interested in treating baggy ski-knees and arthritic paddling fingers with medical marijuana salves. The future tourism implications would be massive, especially if cannabis indeed compliments craft beer (and certainly won’t hurt Ben & Jerry’s visits), but politics can be tricky in the valley with very organized parent groups who might oppose cannabis development in the community.

Other nearby options: Waitsfield (less conservative than Waterbury, closer to mountain communities of Sugarbush and MRV); Waterbury Center (more access to Stowe-side patients and future consumers, and closer to beer and Ben & Jerry’s)

Politically, Franklin County is not at all a favorable location for a dispensary, but the demographics of patients and people almost demands an option for serving the population living north of Burlington. As an agricultural county, there are more pragmatic Libertarian-leaning farmers who support and appreciate cannabis than one might think and plenty of potential for cultivation.

In terms of how people move around the state, St. Albans is not only a potential first stop for Canadian tourists (who will be accustomed to legal cannabis by next winter) heading south, but also for American tourists heading to Jay Peak and for the ‘average’ Vermonters who commute to/through St. Albans on a daily basis.

Middlebury – Of all the places in Addison County, Middlebury is the most favorable politically (shout out to our favorite Vermont advocate and attorney Dave Silberman) and has plenty of exciting agricultural innovation happening in the area. However, being in between existing dispensaries in Brandon and Burlington might make for a  more difficult case. Middkids and their affluent families would be a nice future tourist demographic and would probably have no problem paying upwards of $20/gram.

Newport – There’s definitely vacant business space in downtown Newport and the location could serve a significant part of the current and future patients in the northern part of the state. Although being so close to the feds isn’t a good thing for a cannabis business (federal seizure is more likely down the road from the border patrol than in downtown Burlington) when Canada legalizes in 2018, Newport will be impacted regardless. The local politics aren’t great, but economic desperation and the potential of medical marijuana helping to reduce the local opiate pain-killer supply might help convince skeptics.

Springfield – Similar to Newport, replacing the region’s opiate painkillers with medical marijuana could have excellent economic and social impacts, but Springfield is a tough and stubborn mill-town. Looking to Massachusetts, there are multiple examples of mill-towns where younger entrepreneurs are converting formerly vacant downtown industrial spaces into verdant cannabis cultivation sites.