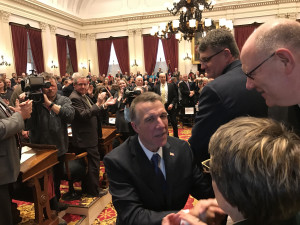 On Wednesday, May 10, 2017, Vermont made history by becoming the first state to successfully pass a legalization bill via the state legislature (instead of a referendum, as with other states). The bill, S.22, would create a commission to propose a regulation bill for 2018 and by July 1, 2018, eliminate all criminal and civil penalties for possession of up to one ounce of cannabis and home cultivation of up to two immature and four immature plants.

HOWEVER, none of this matters if Governor Phil Scott decides to veto the bill, which he may do. In this episode of the Vermontijuana podcast, host Eli Harrington dissects the Governor’s latest responses to the cannabis question of “will he or won’t he sign or veto the bill?”, his philosophical stance on cannabis, and his priority issues for future cannabis regulation.