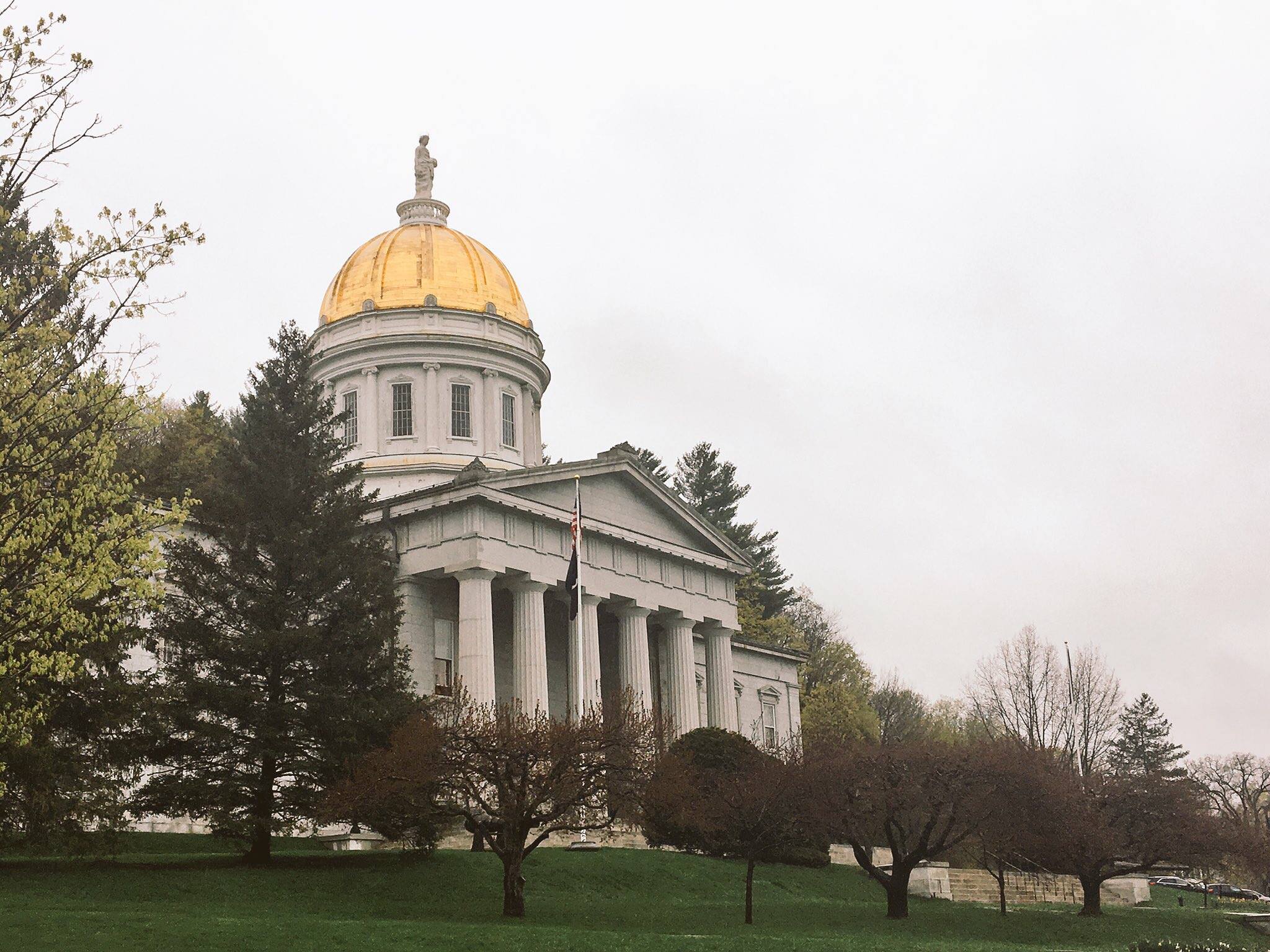 MONTPELIER, Vt. – It was closer to 4:20am by the time legislators left the Vermont State House at nearly midnight on Tuesday, but by the time they descended from their chamber, they had taken a step towards making marijuana legislation history. That’s because in addition to making significant updates to the state’s medical marijuana program, passing a paid family leave bill, passing an ethics bill, and honoring a high school volleyball team (Go Redhawks), the body passed H.170, a bill that would legalize possession of an ounce of cannabis and cultivation of up to two mature and four immature plants.

The House will read the bill for a third time on Wednesday, May 3 where it may make additional amendments and updates. As of 10:15am, there are already four proposed amendments on the calendar to be discussed, including requiring renters to get landlord permission to consume legal cannabis in a dwelling they rent.

If the bill does pass, it would need to be signed by the Senate, then go to conference committee to be finalized, then be signed by the Governor. By Saturday. The House passing the bill is still a historic and significant step forward for cannabis reform advocates, but it will take significant pressure and momentum to actually sign the bill into law in 2017. To listen to real-time updates of the Vermont House, tune into the Vermont Public Radio live-streams online here.

Here’s a look back at how the historic day and night unfolded:

Back in the State House for what might be the biggest #vtpoli day of the year for (non-medical) legislative cannabis reform and a HISTORIC … pic.twitter.com/S9q94cxp7h

The House started the cannabis reform talk early by voting to delay the action on H.167, a bill which originally didn’t involve cannabis at all, but that the Senate had added and passed with a tax and regulate system similar to the S.241 bill the Senate had passed at the end of last session.

Big: House going to delay action on 167 one legislative day, that means only be talking/voting #legalization today #vtpoli

The body then took up S.16, a medical marijuana reform bill that started in the Senate. It passed easily by a vote of 130-16. We’ll report on it in more detail as the terms are finalized in a conference committee but hte bill will add PTSD, Crohn’s, and Parkinson’s Disease as qualifying condition, make it faster and simpler to get medical marijuana cards, update the registry website, and allow existing dispensaries to become for-profit businesses and open new outlets in additional locations.

Still no vote on H.170 #legalization yet – but one of the major changes with the S.16 medical marijuana bill is that by October 1st, there … pic.twitter.com/ocWu7B5QRd

Lots of discussions in the hallways and committee rooms in the afternoon where votes were tallied and re-tallied and possible amendments discussed.

In House Democrats caucus – will be talking legalization shortly…should give some insight into upcoming amendments and direction pic.twitter.com/tFkVZcKKEv

As noted, a significant question is how the Senate will react to the House passage of H.170. Senator Dick Sears (D-Bennington) was a co-sponsor of last year’s S.241 tax and regulate bill and–as with many Senators–has been frustrated with the House failure to address legalization earlier in the session. When asked what would happen if the House passed H.170 and it went to the Senate, he responded that the only way that marijuana reform that would happen this year was if it came through H.167, as the upper chamber will not have time to vote on 170 and create a new conference committee.

With cannabis interest and political activity at it’s highest, many Vermonters were tuned into the VPR live-stream and flooding twitter and facebook with real-time reactions, especially when the floor discussion started…

#marijuana IS a gateway drug… it led me to #twittering and listening to hours of #VTpoli live on @vprnet. 🤦‍♂️😂

One of the ongoing themes for opponents of cannabis reform is that the amounts of cannabis that can be harvested is too much for a single person to consume. Last night, Rep. Chip Conquest (D-Wells River), one of the bill’s original sponsors proactively tackled that question with federal DEA definitions of the size of a joint (.87grams) and an estimated average annual harvest (four ounces).

Even without knowing what those figures were beforehand, representatives were prepared to argue that any homegrown cannabis would be much too much:

“We’re talking about 20 marijuana cigarettes per person per month!” #vtpoli

Debate continued into the night as various amendments were discussed. Some were serious proposals, such as the question of passing a tax and regulate system and included sincere discussion.

Now amendment from Rep. O’Sullivan (D-Burlington that would instead tax and regulate a la H.167 and S.241 before it #vtpoli

Rep @JanssenWillhoit now speaking forcefully in favor of regulation, blasts colleagues for not having vetted H490 this year #vtpoli

Although that amendment failed 42-99, there are more than 42 supporters of tax and regulate in the House; however, many representatives voted against the amendment as a rejection of it diluting the ‘clean’ vote on the legalization-only question.

My no vote was about process https://t.co/qZvjWlDKX0

Regulation amendment fails 42-99, compared to last year’s 28-117. Lots of No votes were about process, not substance. #vtpoli

Other amendments were proposed by sincere opponents who used both tactics and rhetoric to derail and diminish the process of voting on H.170 as it had been passed. This is where the Reefer Madness appeared and things blew up online as listeners reacted to statements by opponents.

Next amendments:
– no legalization until $ for ‘education’
– no until a breathalyzer exists
– no until Feds re-schedule to 3/4#vtpoli

“17% of youth who use #marijuana will become addicted” – Rep. Gage

There really was some extreme rhetoric…

“Consequences are going to be paid for in blood” – a real quote said about #marijuana #legalization by retired judge Rep. Ben Joseph #vtpoli

“17% of youth who use #marijuana will become addicted” – Rep. Gage

Disoriented teens will be drowning in rivers if we #legalize #cannabis in #VT. pic.twitter.com/Oylyh7Lyip

Rep. Browining forcefully asking if reps will take responsibility for future #marijuana road deaths “have you measured your responsibility?”

The issue was not in fact a strictly bi-partisan one – Rep. Tom Burditt (R-West Rutland) who identifies himself as Libertarian-leaning was one of the bill’s sponsors and along with Rep. Conquest, gave the most clear, concise, and comprehensive speeches of the night in support of the bill.

Rep. Tom Burditt with a powerful speech in favor of H170, referring to the racist history and present of #cannabis prohibition. #vtpoli

Reminder that this is the composition of the House and that it’s not strictly partisan issue. Last 2 speakers both dems #vtpoli pic.twitter.com/XvihI4Ecl0

At nearly midnight, the House finally did take a role call vote on H.170 (full role call vote results here), which ultimately passed by a very narrow margin of 74-68.

BREAKING: with vote of 74-68 the VT house has PASSED the House legalization bill H.170 which will be read 3rd time tomorrow – get some slee… pic.twitter.com/V8irmZSNDL

The House will read H.170 for a third time Wednesday, May 3, almost a year ago to the day after the tax and regulate bill was soundly defeated in 2016.