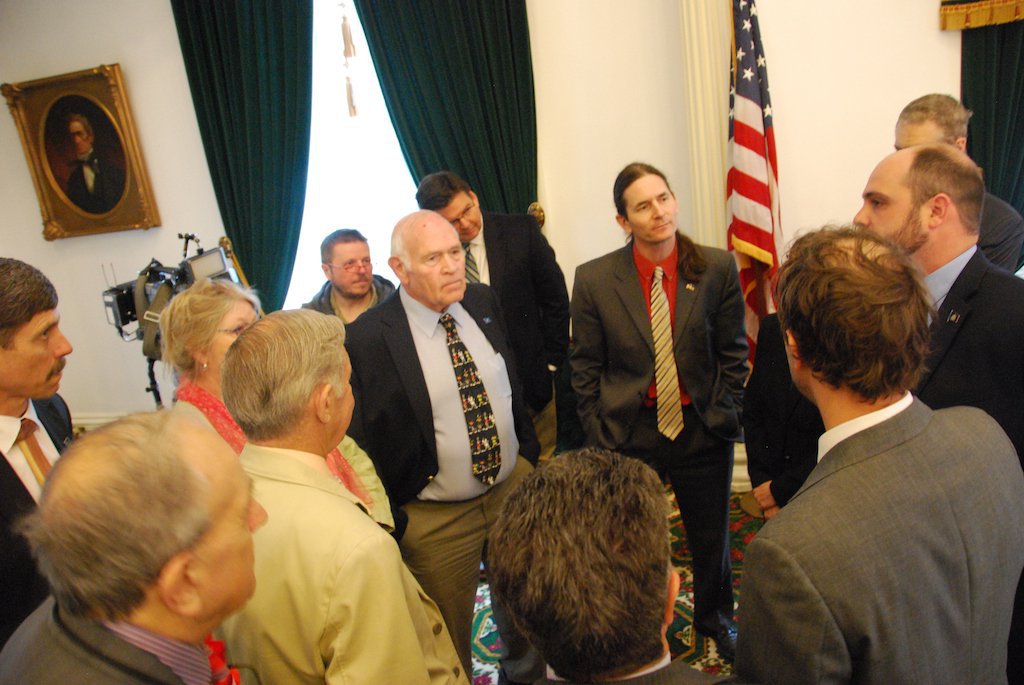 During a recess, senators discuss procedure related to a motion to attach a marijuana legalization amendment to H.167. Photo by Elizabeth Hewitt/VTDigger

MONTPELIER, Vt. — On Friday, frustrated by House inaction on cannabis reform bills this session, the Senate voted 21-9 in favor of a proposal to legalize cannabis and create a system to tax and regulate sales of cannabis in Vermont starting in 2019. The proposal came in the form of an amendment to H.167, an act relating to alternative approaches to addressing low-level illicit drug use.

The move came after an intense and spirited debate by senators Friday, including amendment author Sen. Jeannette White, D-Windham, and Sen. Dick Sears, D-Bennington. As could generally be expected, the passage of the amendment was both lauded by pro-cannabis advocates and decried by detractors. The language in the proposal, offered by Sen. White, draws heavily on last year’s oft-debated, twice Senate-passed and ultimately failed S.241, but with homegrow provisions and looser restrictions on small-scale grow operations.

Sen. Dick Sears (D-Bennington) said he plans to vote for White’s amendment. However, anticipating that it’s unlikely to pass the House, he has an alternative plan to offer up legislation to establish a study committee that would figure out how Vermont could tax and regulate marijuana. Sears says he plans to present it as an amendment to another bill on the Senate floor this coming week, and that he is “hopeful” his amendment would find support in the House and pass this year. “They seem to like studying stuff. This would be an opportunity to study it,” Sears said.

The language in the proposal, offered by Sen. White, draws heavily on last year’s oft-debated, twice Senate-passed and ultimately failed S.241, but with homegrow provisions and looser restrictions on small-scale grow operations.

“We applaud the Senate for approving a thoughtful alternative to marijuana prohibition that would account for public health and improve public safety,” Matt Simon of the Marijuana Policy project (MPP) responded in a statement Friday. “We would love to see the House step up and join the Senate in supporting this sensible reform.”

A poll released by the MPP last month concluded that 57 percent of the state’s voters support noncommercial legalization and that 54 percent favor a full taxed and regulated system of legal sales.

On the other side of the spectrum, Burlington High School drug and alcohol counselor and SAM-VT member Margot Austin denounced the Senate’s move. “I think our obligation and the obligation of legislators is to think about health and safety and what policies are going to,” Austin said in a VTDigger interview. “From a health and safety perspective it’s sad.”

The amendment saw challenges from some lawmakers Friday, including Sen. expressed concerns to VTDigger about road safety, federal illegality and exposure of young children to marijuana smoke. “I just really get disturbed when I hear it being compared to alcohol, because alcohol you actually have to drink to get drunk,” Flory said. “If you have a young child there in a room where they’re smoking pot, that child can get the influence of it. It is not the same.”

It takes 20 votes to override a gubernatorial veto, and the Senate now has a working base of at least 21 lawmakers willing to vote for legalization.

Gov. Phil Scott has said he’s not necessarily opposed to cannabis law reform but would prefer that Vermont wait to get more experience from other states that have already ended prohibition. He also previously said that he is not willing to sign any legalization bill until the state has in place better systems to detect and prevent impaired driving, though it is unclear if he would go so far as to veto any marijuana legislation that may land on his desk.

On the floor Friday, Sen. Sears cited the 2015 RAND study, in which it was estimated that approximately 80,000 Vermonters currently use cannabis. “We got a lot of lawbreakers,” he said. He also argued that with Massachusetts and Maine having legalized marijuana through public ballots last year, Vermont must be ready to respond accordingly.

Responding to a comment that the bill will probably stall in the House, Sears said the Senate could vote and “give an opportunity for the other body of the Legislature to make a decision about whether they want to advance or they want to go back.”

The proposal, in spite of its Senate passage, faces difficult prospects in the House, which has been largely resistant to cannabis reform efforts both this year and in and last year’s session.

H.170, which aims to remove criminal and civil penalties for possession, nearly came up for a vote on the floor last month, but was shunted into the Committee on Human Services for further review amid uncertainty about the level of support for the bill. It has received a couple of hearings but no additional votes. The bill seems unlikely to reach a conclusion as the legislative session nears its end in early May. House Human Services Committee Chair Ann Pugh (D-South Burlington) said in Seven Days that there are no plans to vote on it this week.

Meanwhile, H.490. a bill proposing to establish an adult use commercial marijuana regulatory system, has been sitting in a House committee since March 24 and is highly unlikely to see action this legislative session.

The version of H.167 passed in the House last month called for a study of penalties in place for drug possession in Vermont, and considering whether penalties should be downgraded from felonies to misdemeanors. The house-approved legislative findings of H.167 stated: Vermont must look at alternative approaches to the traditional criminal justice model for addressing low-level illicit drug use if it is going to reduce the effects of addiction and addiction-related crime in this State.

In Friday’s VTDigger interview, Rep. Maxine Grad, who also co-sponsored legalization bill H.170, said she considers the work her committee did on that bill very important, and that she has not yet had the opportunity to review the new Senate language. “I’m open to looking time permitting at anything that comes our way,” Grad said. “It’s not giving any promises or assertions, but I think it’s the responsible thing to do,” she said.  As for Sears’ plan, she offered little enthusiasm, saying, “I don’t think the next step is a study of tax and regulate.”.

The Senate-amended version of H. 167 will receive one final cursory vote in the Senate, before it is returned to its originating chamber for consideration.