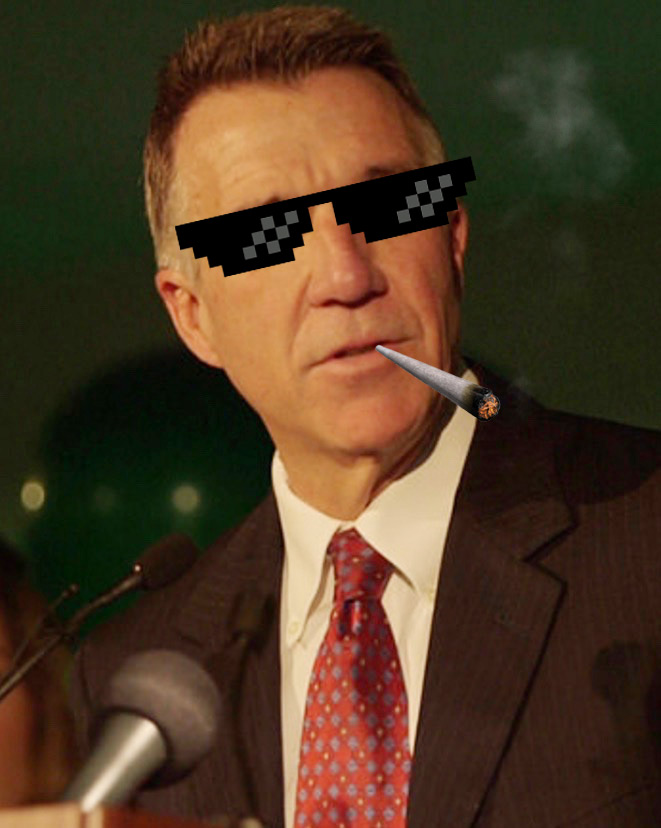 Editor’s Note: In case our readers missed it, this piece was published on April 1 and intended as political satire. We, do however, highly encourage Gov. Scott and Rep. Mitzi to use the following quotes as they see fit.

MONTPELIER, Vt. — During a rare Saturday morning snowstorm press conference held at the top of Burke Mountain, and attended only by Heady Vermont, Governor Phil Scott made national news by reversing his stance on cannabis reform in Vermont and joining legislative leadership at a press conference where he enthusiastically embraced immediately ending marijuana prohibition and establishing the framework for a taxed and regulated market for all 21+ Vermont residents.

“We’ve seen clearly from other states that legalization of marijuana has not in fact caused an increase in teen usage, nor caused a spike in traffic fatalities or any other notable negative public health impacts. In the meantime, prohibition has helped facilitate racial disparities in law enforcement and driven literally thousands of Vermonters into underground markets as criminals, simply for exercising their right to use a plant that has been intertwined and interacting with humans for thousands of years.”

Scott continued to note that he not only supported the criminal justice reforms presently in H.170, but that he wanted the state to go farther and start to create the infrastructure for a Vermont-scale and style value-added agricultural industry.

“In places where there are regulated commercial systems, we’ve seen thousands of new well-paying jobs being created, an influx of young people, and benefits for ancillary businesses, especially those in the tourism sector.”

For Scott and the party leaders who joined him, the agreement represented the next step in what has so far been a remarkable 2017 session that produced a nearly unanimous budget vote and a tripartisan bill refuting the latest federal immigration policies.

After Scott’s speech, House Speaker Mitzi Johnson (D-South Hero), a UVM graduate and year-round resident of the Islands who had previously been lukewarm on cannabis herself, noted that the future of the Democratic Party relied on not alienating young Vermonters and collaborating across party lines for meaningful political reforms.

“We’ve shown with the budget negotiations that we’re committed to collaborating across party lines for the benefit of Vermonters, and on this topic, Vermont residents from across the political spectrum — especially the young Vermonters we’re working hard to retain — made their voices heard.”

Johnson noted how encouraging it was to hear from so many engaged Vermonters on the issue and enthusiastically rallied supporters to continue reaching out to her through any and all means possible.

Johnson noted how encouraging it was to hear from so many engaged Vermonters on the issue and enthusiastically rallied supporters to continue reaching out to her through any and all means possible:

“I encourage even more of them to call the Speaker’s Office on Monday and Tuesday this week, and ask my constituents in the Islands to get in touch with me via Facebook, Twitter, email, and calling my listed number on the Vermont Legislature Website.”

“I had been on the fence, but after hearing from my constituents and speaking to retired law enforcement officials and officials from other states, I’ve been convinced that public safety will actually increase when police don’t spend unnecessary time or consideration on cannabis when we’ve got actual drug-related crime issues and need every resource available — including cannabis tax revenues — for those more serious.”

When asked about his reaction to the Governor’s claims that Prohibition had failed and that a regulated system could actually benefit Vermonters, a position he’s advocated for the better part of two decades, Lt. Governor Zuckerman and fellow Progressive members in the House and Senate issued the following statement, “Uhhhh, ya think?”

When asked how quickly he thought the legislation might move through, Scott was optimistic.

“I expect both H.170 and H.490 to be passed by Wednesday afternoon, we’ve clearly got bigger things to worry about from our own Federal Government that we don’t need to be interfering with the liberty and economic opportunities of Vermonters.”

Editor’s Note: In case our readers missed it, this piece was published on April 1 and intended as political satire. We, do however, highly encourage Gov. Scott and Rep. Mitzi to use the preceding quotes as they see fit.