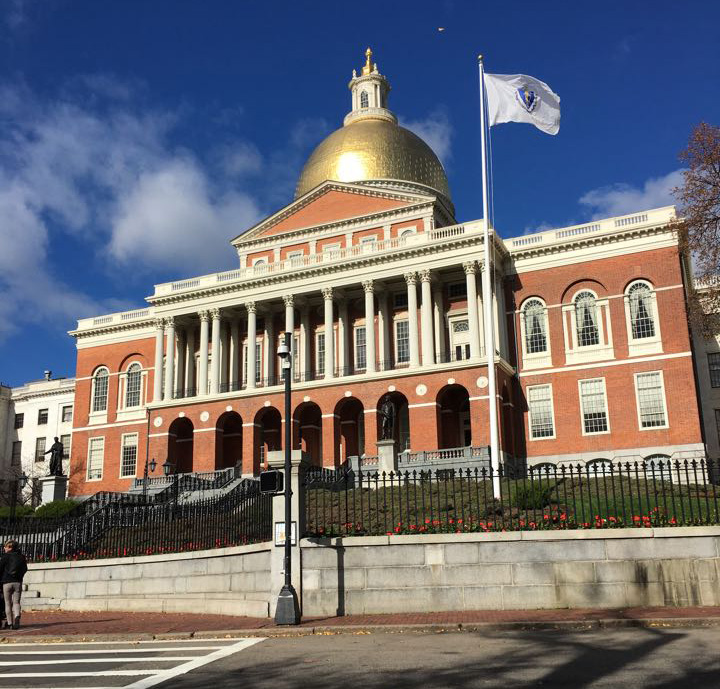 BOSTON, Mass. —Exactly three weeks after Question 4 became law in Massachusetts, Governor Charlie Baker signed a law that will delay the opening of retail marijuana shops in the state by six months. He announced his final decision on Friday, December 30, in front of the State House in Boston, just as protestors from the Massachusetts Cannabis Reform Coalition (MassCann) and the National Organization for the Reform of Marijuana Laws (NORML) began to assemble.

Commonwealth voters passed Question 4, a ballot initiative which proposed the legalization of marijuana in Massachusetts and the implementation of regulations similar to those on alcoholic beverages, in a majority vote this past November. The law went into effect on December 15, 2016.

As previously reported by the Boston Globe, a bill was drafted weeks later to delay the implementation of legal marijuana by at least 6 months. It was sent to both the Massachusetts House and Senate — where they were approved in a matter of minutes. The process took place without public hearings or public notice —formal or informal.

While the new law will not affect personal possession or home grow provisions contained in Question 4 as it was originally written, it will significantly damage the intended timeline of implementing a system of legalization in Massachusetts.

For example, as reported by Heady Vermont last November, the creation of the Cannabis Control Commission, the regulatory agency which would license retail marijuana establishments, was meant to materialize no later than March 1, 2017. Now that will be delayed to September 1, 2017. Likewise, the deadline for when the Cannabis Control Commission was to have its initial regulations in place will also be delayed from September 15, 2017 to March 15, 2017.

Baker, a Republican, publicly campaigned against Question 4 in the months leading up to the election. Last March, Baker partnered with Boston Mayor Marty Walsh (R) and Massachusetts Attorney General Maura Healey (D), publishing an op-ed in the Boston Globe called simply, “Mass. should not legalize marijuana.”

In spite of the fact that the three most powerful politicians in Massachusetts publicly campaigned against Question 4, it passed, just barely, with just over 53% of the electorate voting “yes.

Massachusetts Senate President Stan Rosenberg (D) and House Speaker Robert DeLeo (D) had also publicly opposed Question 4. In a quote to CBS News, Mr. Deleo explained that pushing back the deadlines would give lawmakers more time to improve on the law by providing consideration to pertinent details that were “not addressed in the ballot question.”

Before Governor Baker signed them into law, Senator Rosenberg also defended the delays, saying they do not conflict with the will of the voters: “For example, most of us who’ve looked at this don’t have a clue whether there’s enough money from that tax rate to actually pay for setting up the agency, for doing the licensing, for doing the enforcement and there also have to be considerations for public safety and for public health.”

Communications Director Jim Borghesani of the “Yes on 4” Campaign spoke on behalf of the successful initiative in a statement to Heady Vermont. He made it clear that the Massachusetts legislature should not have made any changes to the initiative. “We opposed the delay and we will continue to advocate for giving the Cannabis Control Commission the ability to get started on their work of creating the regulations that will govern the industry. If any legislative action is required, it should be undertaken upon the advice and recommendation of the Commission.”

Matt Allen, former president of the Massachusetts Patient Advocacy Alliance (MPAA), currently works for the ACLU of Massachusetts. In a quote provided to Heady Vermont, he stated that the ACLU also opposes the delays, calling them “unnecessary.” Now that the delays are imminent, he stated that “Question 4 should be implemented according to the timelines set out in the new law … The ALCU will continue to push to ensure the law is implemented swiftly and in a manner that reflects the will of the voters while improving public health and public safety.”

While the ACLU’s statement conveys a much more passive message regarding maintaining the integrity of the original ballot question, Allen provided additional testimony that was submitted to the Boston City Council before Baker signed the delays into law.

In the testimony, the ACLU testified that there should be “no changes to the ballot initiative… it should be implemented and passed by the voters. All legitimate issues of concern that were brought up by opponents during the campaign, such as procedures to prevent accidental exposure to marijuana by youth, can and will be addressed through sensible and balanced regulations.”

The testimony continued by saying that there would be no need to implement delays because the first three deadlines require little to no funds to complete: “That includes the December 15 deadline, when the law goes into effect and possession of marijuana by adults becomes legal, the February 1 deadline for the governor to appoint individuals to the cannabis advisory board, and the March 1 deadline for the treasurer to appoint the three members of the Cannabis Control Commission.”

While both the ACLU and the “Yes on 4” campaign readily acknowledge the pointlessness of the delays, they were notably absent as dozens of protestors gathered in front of the State House to publicly oppose the Massachusetts legislature. And some activists are wondering why there appears to be such a lackluster response from the very agencies who spearheaded the Question 4 campaign to begin with.

In spite of the fact that Question 4 went into effect on December 15, 2016, the new delays prolong marijuana’s legal status in Massachusetts as a gray area. While that it is now legal to possess certain amounts and smoke it on private property, marijuana itself remains illegal to buy or sell, condemning users to continue to purchase marijuana from the black market, and assuring that the state will continue to lose out on potential millions in marijuana tax revenue. Additionally, marijuana is still listed as a Schedule 1 narcotic by the DEA, making it impossible for legitimate businesses in other legal states, such as Oregon and Colorado, to have access to the banking industry.

The Massachusetts Cannabis Reform Coalition, also known as MassCann, in collaboration with NORML, was one of the agencies responsible for getting Question 4 on the ballot last year. In a statement to the Boston Globe, a representative for MassCann wrote that the delay “not only flies in the face of the will of the voters who voted for the January 2018 deadline, it shows contempt for the Legislature itself, having been passed, not after three readings to the full House and Senate, but in the course of less than an hour by just two senators and five representatives.”

In a similar sentiment, President Michael Latulippe of the Cannabis Society of Massachusetts expressed his disappointment with the ruling and offered his prediction for how legalization might continue to unfold in Massachusetts: “I don’t have great hopes for adult use in the legislature. I actually think that this is a scary legislative moment. Here you have a legislature that is going to go ahead and amend what was a very democratic ballot process,” he said. “For years, it’s been a way for liberals to pass things that otherwise couldn’t get passed. This is a precedent-setting moment. And these aren’t Republicans, these are liberals doing this.”

Latulippe’s pessimism undoubtedly reflects the national political climate of uncertainty and distrust in government. “With Trump and the gang, this is going to be a nightmare,” he said.

This presidential election was the second time in 10 years that a historically unpopular Republican candidate lost the popular vote but won the election. The United States Senate for the first time in history is refusing to confirm the appointment of a ninth Justice to the Supreme Court, meaning pertinent issues with widespread public support such as global warming, transgender rights, and gun control will go unaddressed.

However, Latulippe does hold out some hope that Massachusetts can, for lack of a better phrase, “get our shit together.”