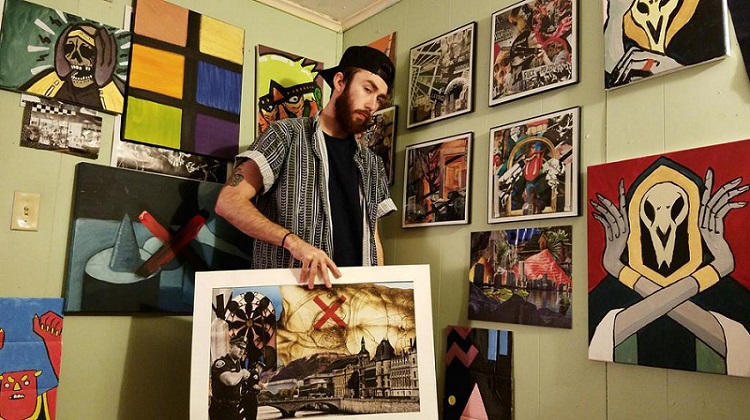 Calvin Heinz, AKA The Sludge Boss

Editors Note: Heady Vermont is always evolving. We’re working hard to bring more educational and evocative events, promote positive discussions and constructive dialogue, and generally, elevate the state of the cannabis paradigm and landscape in Vermont and beyond. If you are, or know, an artist(s) or artisan(s) who you think fits the bill and would like to be featured, please encourage heady human beings to reach out to us at eli@headyvermont.com or monica@headyvermont.com

HEADY VERMONT: Tell us a little bit about your personal background—age, where you were born, any academic background you’d like to share or anything else to get us acquainted…

Alright yeah starting off with basics, okay totally. I’m currently 23 years of age, I was born in Florida, moved around a bit, including spending some time in Japan, then moved back to Florida and mostly grew up there. I’m coming up on the year anniversary of moving up here to VT in January.

In terms of academic background, I never went to actual art school and spent much of my time in ‘formal education’ when I was younger drawing and doodling — I just never stopped! I was also lucky enough to meet my current roommate and good friend in sixth grade, who drew a lot and helped challenge and inspire me to keep developing my art. In high school I took a few art classes like drawing and painting and had a drawing teacher recommend and get me into an A.P. Portfolio class. He was a great dude who really supported anyone, that move definitely had an impact on me. From that class I learned quite a bit: some basics of design, basics of presentation, matting, framing, making stuff look “professional” and some fundamentals of a few different mediums, charcoal, watercolor, lithography.

That class actually opened me up to my first thoughts of collage even though there wasn’t an actual section of the course about collage. During the one semester of college that I actually showed up for my classes, I took Painting and a Principles of Design. I’ve continued my “formal” education by taking a few online college courses on my own schedule over the years on an assortment of subjects like typography, music production, programming, and various history courses. I think playing with different mediums and styles and methods is super important as it’s critical to continue to educate yourself and in my case I like to learn a wide variety of things–I think that diversity is key.

HVT: Tell us a little bit about your profile as an artist—from where do you draw inspiration, what media do you prefer, how would you describe your style?

Inspiration is almost anywhere and that’s the greatest thing. Literally anything: a feeling, a thought, a view, a sound, a taste, a smell. And they’re all interconnected and I believe that perception and inspiration go hand in hand. We’ve always had a lot going on around us as human beings, and we all know it but nowadays we have this astronomical amount of information and stimuli spiraling around us and it can be a tad overwhelming at times.

This has been an idea behind a lot of my collage pieces. I mean any message you perceive in my work has weight, everything is up for interpretation, this isn’t the only message I try to convey, just one of my recurring themes is how we are bombarded with information from all over, seemingly unconnected, but at the same time connected.

As to what media I prefer, I like to stay varied and always trying/learning new things. The type of work that I’ve done the most (that I’ve shared) is collage, but recently I’ve been diving deeper into typography and painting, so in the foreseeable future there’s going to be more of those pieces. I’m also super interested in doing woodblock prints soon. Visual media is probably my main focus, but for about four years now I’ve also been producing electronic music, and that’s a major love of mine.

Working on music I always feel like I’m learning, and it’s almost like designing or painting but with sounds, the process has a very similar feel to painting or drawing to me, lots of times it’s very similar to making visual art. When I sample it sort of feels like using an image from a magazine in a way. That familiarity can really add to the listener’s connection with the music, be it a classic drum hit like a RZA snare, an 808 cowbell, or a snippet from a song, or movie dialogue, when you hear those sounds you know them and even if the track is new it feels familiar, comforting in a way. Even when I’m not sampling, the arranging of songs feels like assembling a collage, or laying down brush strokes.

Style wise I think there’s always a thread of keeping everything simple with a good degree of movement, or animation. I try not to be to rigid, and to have some play in all the lines I make. Some might find it juvenile maybe, but anybody can do perfect balance in design. It’s just math. It’s that personal touch, imperfections. Those make pieces visually interesting and not sterile. We’ve had periods of art where proportion was perfect, where colors and lines were photo realistic, we’re at a time where cameras can make things look more real than real life, there is absolutely no longer a need for you to be a classical trained “master”  to make something deemed worthwhile. Perfect does not mean great art. That being said not just anything can be a masterpiece and just because it’s imperfect doesn’t mean it’s great art. Over anything it’s important to know the fundamentals and rules, so you can break them in more interesting ways.

HVT: How long have you been in Vermont and do you feel that your art has a connection to your setting in VT?

I’ve been in Vermont for less than a year! Maybe it’s a little early to say my art has a direct connection, but being in Vermont has definitely had an impact on my creative process — it’s a whole new world up here! When I moved, I had never been to Vermont, and exploring around this area has been such a phenomenal time. There’s also a pretty interesting art scene around here–it’s not huge, but it seems inviting. The used shops are a place I can get magazines and vinyl, the bars are interesting, there are so many creatives of different types around here and so many different areas that inspire me. This state has some of the best glass-blowers I’ve ever seen — a big shout out to @ad_nauseam

I haven’t reached out much because I feel I need to develop more and spend more time here before jumping in, but I’m definitely going to start attending some classes and workshops held by BCA come the new year. I’ve also noticed more than a few glass shops support local artists by showcasing/selling their artwork during my visits, and I think my surrealist pieces would fit a little niche maybe not fulfilled in some shops, so that’s a plan in the works.

I just want to feel invested in the area before trying to barge in on local territory, gotta pay respect and show I’m not a culture vulture you know?

HEADY VERMONT: Has cannabis played a role in your life? If so, in what ways? If you consume, do you feel it has an effect on your artwork?

Cannabis has been in my life for a while now. It’s a wonderful and interesting thing, it can unify and divide. I do consume, though this year not on a regular basis like I had for the last few years prior and I feel that decrease has actually lead to a more mature respect for the plant: I appreciate it’s benefits and effects differently now versus when I was smoking every day. It definitely has an effect on creativity, that effect being different with each strain and I’m sure person to person, so I’m not going in depth and prescribing, but some mellow me out, some stimulate me, some help me get loose, some help me think critically. It’s amazing that there are so many different strains that can have so many effects. This does mean there is an avenue for better identification and prescription by professionals to achieve desired effects however, which is why it’s important to legalize medical marijuana for treatment purposes, and recreational marijuana so recreational users know exactly what they’re getting. Eveidence of cannabis oils helping to fight cancer seems reason enough for medical marijuana to be legalized everywhere in the country.

HVT: What is your vision for the future of cannabis in Vermont? Do you have an opinion about the cannabis reform process and changes you’d like to see?

I can’t say I’m entirely up to date on everything cannabis related in Vermont, but I feel the future is shining. We have many bright people working from all avenues to make the more conservative leanings of our current programs more fleshed out and I think with the next few elections there is an overwhelming possibility that the laws in place currently will swing towards progressive leanings and at least land the mark at a centrist position. It’s good we already have our foot in the door with medical. From what I’ve seen every state that has legalized recreational has benefited in many different ways from regulation and sale so it’s a great economic boom that states are depriving themselves of in favor of conservative values and that seems ludicrous to me.

I think cannabis like most things should at least have an open dialogue around it.

See more work by The SludgeBoss (aka Calvin Heinz):