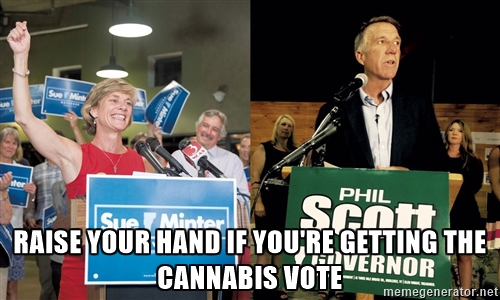 BURLINGTON, Vt. — As the Liberty Union candidate for Governor, Bill “the Spaceman” Lee has advocated for legalizing all drugs, famously used to sprinkle pot on his pancakes (de-carb it first, bro!) before he pitched for the Red Sox and Expos, and claims to have once smoked weed with George W. Bush at the Boston Science Museum.

So while he’s at the top of our ballot for ‘Vermonters we’d love to smoke a joint with,’ for the purposes of this column, and with respect to Mr. Lee, we’ll stick to contrasting the Democratic nominee, Sue Minter, and the Republic nominee, Phil Scott.

While there are plenty of contrasts between the two candidates on various topics, when it comes to cannabis policy, here are three reasons that show why Sue Minter is the clear choice for Governor.

Consistently, Phil Scott’s stance on broader legalization can be summed up as, “I’m not saying never, I’m just saying, not now.” When the Senate passed their legalization bill (S.241) in February, Scott even said that he “appreciated the discussion about ending Prohibition,” which is consistent with his reputation and record as the socially-moderate Republican who supported decriminalization in 2013.

However, when he says we should continue to wait for ‘a few more years,’ Scott fails to acknowledge that the process of creating good marijuana policy in Vermont is, in fact, a process. And like any other process, the first step comes first.

Between the four legal states and Washington, D.C., there are plenty of lessons to be learned in terms of where to start with better marijuana policies: The Massachusetts referendum is setting a cap on the tax limit at 15% to keep legal prices competitive with the illegal market; in Maine, the proposal includes a lounge provision to give people a place to legally consume cannabis, and allocates a certain amount of the total industry supply to smaller producers.

Vermont could start from any of these same starting points and indeed, are already advantaged having years of data and expert testimony from other states. But no other state has legalized marijuana the way we will in the state of Vermont, and only in Vermont will we create the best policy for Vermont, based on experiences and lessons we learn — in Vermont. It’s not about getting it perfect, it’s about getting started.

Scott hasn’t said ‘never,’ but when he says that we need to ‘know more,’ he doesn’t say what he needs to know, or how his questions might be answered. At the last debate (where it was asked), Scott mentioned road impairment, edibles, and the tax structure in passing, but summarized by paraphrasing the Governor of Colorado and affirming that he’d wait ‘a few more years.’

By contrast, at that same WCAX debate (legalization question at 37:00), Minter forcefully and directly noted her support for legalization and acknowledgement of the need to change the status quo. Unfortunately, Minter sounds more like the police when she talks about roadside testing and references the still-mythical ‘pot-a-lyzer’; however, her conditional and direct support for legalization is way better than Scott’s nervous dismissal.

2 – Cops won’t start liking pot, but the Gov decides the next Top Cop

During the 2016 legislative session, the law enforcement community was a strong (read: armed and uniformed) voice against cannabis reform. The police’s enthusiastic anti-marijuana lobbying was openly questioned by the Burlington Free Press, who in May both ran a front page story and published an editorial calling out the impropriety of police lobbying against marijuana while uniformed and on the clock.

All of this opposition happened last year when Governor Shumlin was openly lobbying for full legalization and regulation via S.241, and pressing his department heads to do the same, including the commissioner of the Department of Public Safety, who the Gov appoints and who theoretically agrees with, and answers to the administration. However, as Mark Johnson of VTDigger reported last February, even with his boss openly rooting for legalization, Commissioner Keith Flynn blatantly broke ranks with Shumlin and “took off the handcuffs,” encouraging fellow senior officials to ‘speak their minds’ (read: oppose legalization), which both the fellow leaders, and the rank and file troopers and municipal cops beneath them did at every occasion.

There’s no guarantee that Sue Minter would appoint a more cannabis-friendly new top cop — and it likely wouldn’t make a huge difference even if she did: The majority of the rank and file troopers and administrators in law enforcement don’t support legalization and aren’t likely to do a 180-degree turn and start advocating publicly for it (until they retire and feel comfortable speaking against the union, that is), regardless of the commissioner.

However, whatever Phil Scott might have said publicly about his ‘philosophical agreement’ with ending Prohibition, he’s clearly made more serious assurances to the law enforcement community themselves in private.

There are multiple reasons cops would favor Scott over Minter — like her focus on gun control, which is very unpopular with the police/military crowd — but as the head of the Vermont Police Association, Vergennes Chief George Merkel, recently told Vermont Watchdog, their endorsement of Scott specifically came down to legalization: “Most important is the legalization of marijuana. (Scott’s) not rushing into anything, he’s waiting to see how the laws impact other states.”

Most importantly, regardless of what the legislature might or might not pass in terms of broader legalization, the Department of Public Safety still (unfortunately) oversees the entire Vermont medical marijuana program.

With clear support from legislative leaders for making major medical marijuana reforms, the leader and lieutenants of the Department of Safety in 2017 can either assist patients and lawmakers in moving reforms forward, preserve the semi-functional status quo, or work to impede progress for present and future patients.

One of the more popular false narratives from legalization opponents is that, “this is all about the money.” It’s an argument that Scott used in February following the Senate passage of S.241, saying in a statement, “In my opinion, this bill is as much about the money as it is about ending a failed prohibition, and this major policy shift should not be about money and commercialization. I therefore do not support this proposal at this time.”

Time and time again, Scott’s campaign has made jobs and the economy a priority — he’s used a variety of statistics (some more accurate than others) and statements about the loss of our workforce, the need to attract new jobs and new workers — and the need to do it all without raising taxes or any new spending.

So what kind of industry could create jobs and economic activity (including in rural areas), attract young people, utilize the working landscape, and supplement Vermont’s tourism/food/beer industries — all without needing to build new infrastructure except for a few regulatory positions?

It’s head-scratching to hear Scott to talk about his desire to protect business from government interference, then to say that as Governor, he would directly interfere with the development of a legal cannabis industry — An industry that attracts young people is mostly comprised of small businesses, and promotes a working landscape and rural development; an industry that, while illegal, is already estimated to be between $125-$225 million dollars in Vermont.

To be clear, both Minter and Scott are missing the boat when it comes to the potential positives of legalization, especially for the young Vermonters they so desperately want to attract and retain (reminder that 71% of Millennials support legalization, including a majority of conservative Millennials). Kudos again to David Zuckerman for being the only statewide candidate who’s openly discussed the positive risks of legalizing and regulating marijuana.

The bigger problem with Scott’s argument here is that he is comparing legalization of marijuana with Vermont Health Connect by implying the state would be taking on some huge financial risk by allowing legal marijuana businesses to operate. Of all the bad arguments for continuing Prohibition, the false premise that it would cost the state too much money to open up for business is one of the worst.

In conclusion, Vermonters should step back and be thankful that both of the major party candidates are of such a high quality — and that even our fringe candidate is cordial and competent, if not a little kooky. With a very tight race, and high turnout expected, voters will be looking beyond the primary personality and policy differences and thinking about specific issues when choosing which oval to darken.

The future of cannabis is a significant consideration for many voters at both the local and statewide level, and while the overall caliber and integrity of both candidates is high, the cannabis campaign choice is clear: Sue Minter for Governor.