In the Fight to Legalize Pot in Mass, Rick Steves Urges a “Smart” Approach 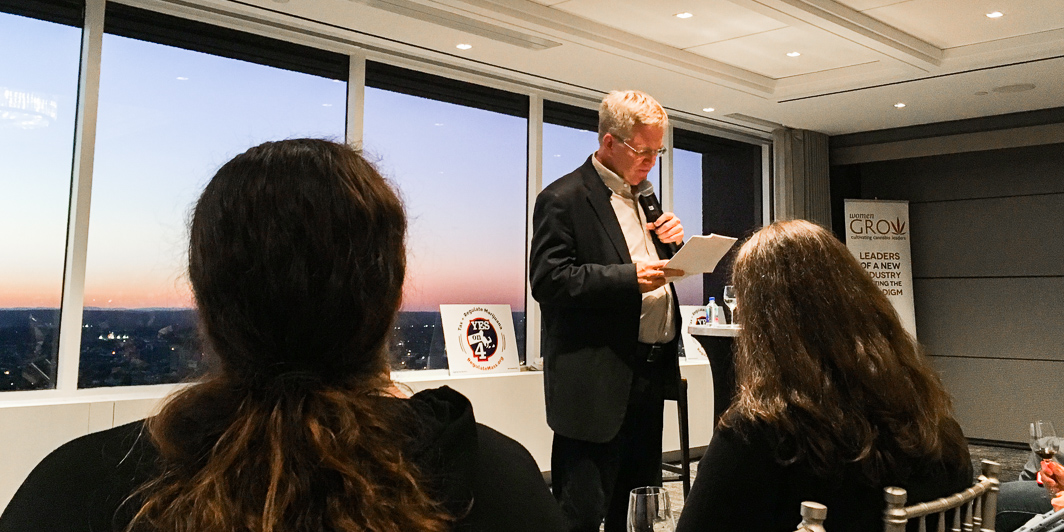 Rick Steves Speaks about Cannabis Legalization at a Women Grow Event in Boston Massachusetts. By C.E. Tanner for Heady Vermont

BOSTON, Mass. — Rick Steves is greeted at the UMass Club in Downtown Boston to a quaint but warm reception, having earned his living and gained a loyal following as an expert on European travel. Steves hosts a travel show on PBS called Rick Steves’ Europe, which has been running for nine seasons, and he has published countless guidebooks and tip sheets on navigating Europe and broadening cultural perspective.

Tonight, however, he’s here as a guest of Women Grow Boston, and he’s going to talk about weed.

Steves is the perfect advocate for marijuana legalization in the US. He has traveled the world, bearing witness to how other countries circumnavigate “dumb laws” to smoke marijuana peacefully. In addition, he was a driving force behind legalizing recreational marijuana in his home state of Washington in 2012, and later in Oregon. As a “rich white guy,” he is often awarded more credibility than most working in the industry, and has the financial resources to influence political decision-making.

He wants you to know one thing: he’s not “pro-pot.” Rather, he is “pro-civil liberties” and against government intervention into peoples’ lives, consistent with the libertarian philosophy. “No more Cheech and Chong jokes!” he urges us.

Even after all these years, legalization advocates are still fighting many decades-old stereotypes, including that of the “lazy stoner,” and the lingering perception of marijuana as a gateway to harder drugs.

Just this past March, Massachusetts Governor Charlie Baker, along with Boston Mayor Marty Walsh and Mass Attorney General Maura Healey, co-authored a front-page editorial for the Boston Globe titled, “Mass. Should Not Legalize Marijuana,” in spite of the fact that a majority of residents support legalization.

“I thought Massachusetts was a ray of light on the East Coast for progressive thinking, but you still have a lot of work to do.” He gets a good laugh from the crowd, but it’s bittersweet.

He admits to the crowd in Boston, “I thought Massachusetts was a ray of light on the East Coast for progressive thinking, but you still have a lot of work to do.” He gets a good laugh from the crowd, but it’s bittersweet.

This November, Massachusetts residents will vote on Question 4, which proposes the legalization, regulation, and taxation of cannabis. However, the proposed amendment has attracted substantial backlash from businesses both inside and outside Massachusetts to stop marijuana from becoming legal. Steves has a name for these types of businesses: “The PPP,” he says, “Pot prohibitionist profiteers,” are the people funding the “No” campaign in Massachusetts. He names the alcohol and pharmaceutical industries, specifically, as two powerful lobbies against Question 4. “It’s just not good for business,” Steves says, “They care about their bottom line, simple as that.”

In spite of the setbacks Question 4 faces this fall, Steves seems cautiously optimistic about the future of recreational marijuana in New England. When asked how potentially legalizing in Massachusetts would affect marijuana’s status in other states, he responded, “Once they [the other New England states] see the dollar signs, they won’t be able to say no.”

With some frustration in his voice, he continues, “We already know how this plays out, we’ve seen it. Just look at Colorado. Nothing has changed, the sky isn’t falling. They’ve just taken weed off the black market, legalized it, and taxed the hell out of it.”

In 2015, marijuana sales in Colorado brought in an additional $135 million in taxes to the state, for which the state allocated $35 million to fund improvements to public schools. Some cities in Colorado, like Pueblo, are allocating pot taxes to send local residents to college. Steves also notes that legalization has had a significant positive effect on the housing markets in Colorado and Oregon, and that both states have seen their tourism numbers rise. “There’s also a cool factor,” he says, alluding to the fact that legalizing pot can enhance a city’s desirability.

This year seems to be a turning point for marijuana’s status in the U.S. Public support for full legalization is at 57% nationally, and has been steadily climbing since the early 1990s.

While the effort to legalize marijuana state-by-state is unquestionably frustrating for legalization advocates, Steves notes that our country’s prohibitionist history should serve as a point of reference. He draws the obvious parallels between alcohol prohibition in Depression-era America and the marijuana prohibition laws that remain in enforcement today. When the public demanded that consumption of alcohol be legalized, the laws changed, but gradually. First it was beer, then liquor shortly afterward, and then finally home-brew.

Massachusetts’s Question 4 almost didn’t make it to the ballot because there was such staunch competition between two very similar bills proposed by competing groups. We can’t afford to get wrapped up in the fine print, says Steves: Marijuana is having a moment, and we have to keep that momentum going if we want to be successful in the fight to legalize.

“It will take time,” he says, reassuringly. “Eventually Boston will have its own social weed club, but it’ll take time.”