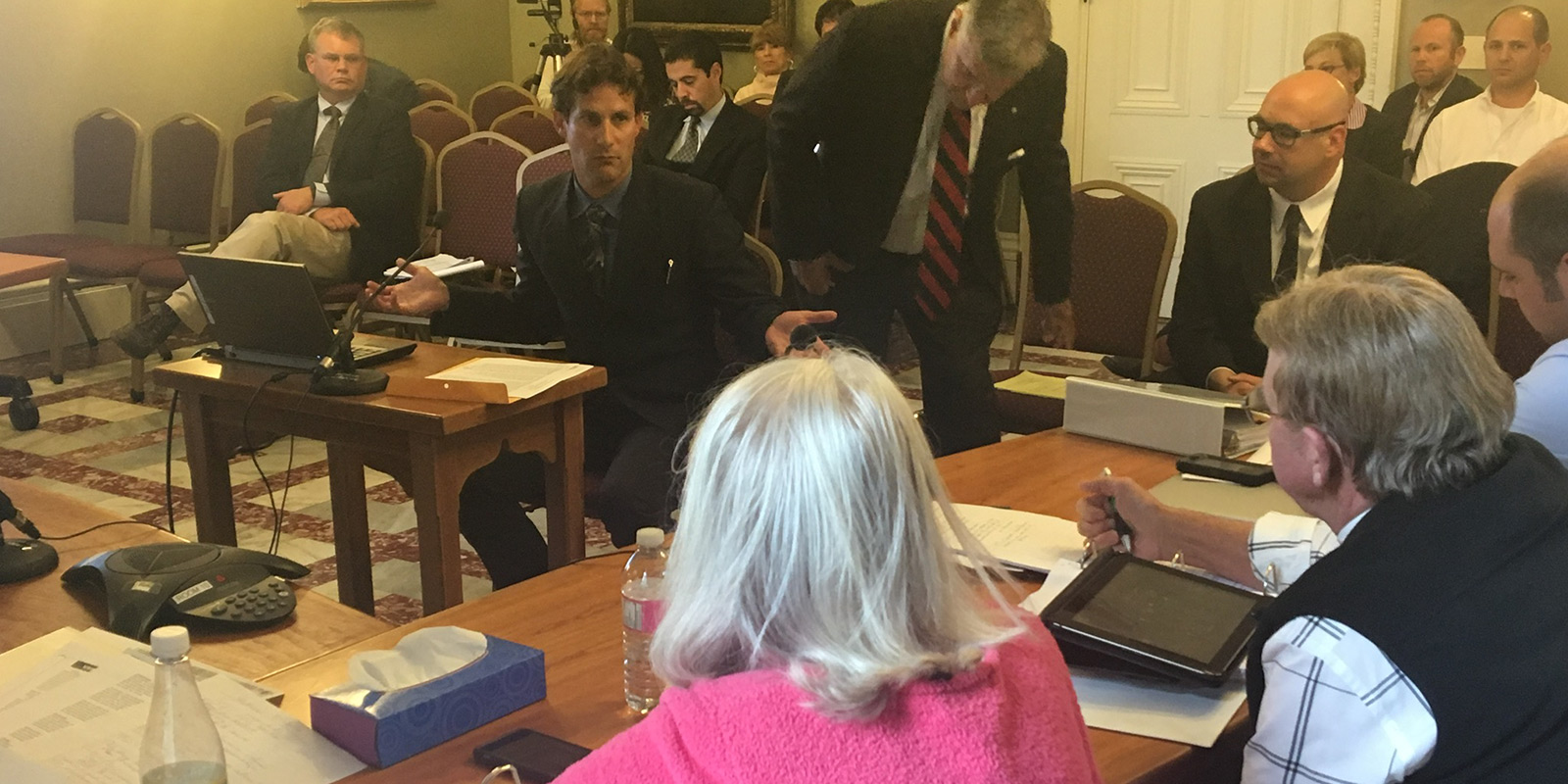 Among those testifying were the leaders of each of the four medical marijuana dispensaries currently allowed under state law, a medical marijuana patient, representatives from state agencies, and a group from the Bennington area who testified that the state should open two new dispensaries — specifically, one in Southwest Vermont and one in the Northeast Kingdom. Presently, Vermont patients may only buy their medical marijuana from one of the state’s four dispensaries, located in Brattleboro, Brandon, Montpelier and Burlington. In accordance with Vermont statute, the maximum number of dispensaries that may be licensed is capped at four.

The Committee Chair and leader of the session, Senator Dick Sears (D-Bennington), had previously noted his support for increasing the scope of the medical marijuana program, telling Seven Days and Heady Vermont, “People in my area are having issues getting cannabis” and then confirming when asked directly that, “I’m looking to expand the availability of medical marijuana.”

One of the main themes discussed was increasing the number of citizens on the Vermont Marijuana Registry, which the Department of Public Safety testified currently includes approximately 3,000 patients. In most other states with medical marijuana programs, the percentage of the population registered as patients is between 1-2% (with the highest percentage in Maine, at 3.42% of the state population), but in Vermont, it’s less than one half of a percent of patients.

[pdf-embedder url=”http://headyvermont.wpengine.com/wp-content/uploads/2016/09/W-Mark-Linkhorst-Medical-Marijuana-Access-in-the-US-Vermont-9-23-2016.pdf” title=”w-mark-linkhorst-medical-marijuana-access-in-the-us-vermont-9-23-2016″]
Among (many) other issues, Linkhorst noted that Vermont doesn’t presently include PTSD as a qualifying condition, saying, “PTSD has been recently approved in states with programs much worse than Vermont’s, even Chris Christie recently signed legislation adding the condition to New Jersey’s list.”

Among the diverse factions and sources testifying, common issues with the current system surfaced: Securing a recommendation from a doctor takes too long and is too onerous for sick patients, the high cost of medical marijuana (for both dispensaries and patients), the closed system forbids patients from comparing dispensaries, the inability and the lack of a uniform testing protocol.

The witnesses from Bennington, including Bernie Barriere, a Vermont native and former All-American wrestling champion and Mount Anthony graduate with a background in security and event management, suggested that the best solution is to allow new licenses to be issued for additional dispensaries in locales not presently served, namely Bennington County and the Northeast Kingdom.

Barriere also cited research that lists Vermont medical marijuana as the most expensive in the country at over $374 per ounce and also noted that when the law was passed to allow dispensaries to open, there were only 800 registered patients in the state, versus the nearly 3,000 registered presently.

Representatives from the four dispensaries agreed that the regulations should change, but said that if some restrictions were removed — namely, the ability to advertise more broadly in order to attract new patients — they could serve the existing and future patients themselves.

Executive Director Alex Ford of Brandon-based dispensary Grassroots Vermont had previously petitioned the state unsuccessfully for the right to open a dispensary in Williston to compete in the state’s most populous county. She testified that despite being the smallest, her dispensary in Brandon has both the lowest prices, and cheapest, most comprehensive delivery service in the state. Ford also argued that with competition among the existing dispensaries, patients could be better served without needing any new dispensaries. “All we need to do is have access to patients and let them decide,” Ford said. “Let the market call the shots. We’ve got four very competent dispensaries and haven’t had major issues and are all struggling to pay back the enormous amount of money we’ve invested to get started.”

Senator Dustin Degree (R-Franklin) pushed back on the idea that the existing dispensaries wanted to compete for patients, but only amongst themselves, telling Ford, “You say you want more competition, but no more licenses — you don’t want real competition, you want to be able to expand.”

The afternoon testimony was highlighted by Dr. Kalev Freeman, MD, PhD, an emergency room physician who teaches a medical cannabis course at the UVM College of Medicine. Dr. Freeman kicked off his presentation by saying, “It’s time for a serious discussion of cannabis being a solution for the opiate epidemic,” and proceeded to outline relationships between the two substances.

When asked, Dr. Freeman largely dismissed the ‘gateway theory,’ but noted the issues with poly-drug use that he sees as an ER physician and discussed substituting medical marijuana for opiates, the public health effects of increased access to medical marijuana (noting that states with medical cannabis laws have a nearly 25% lower mean annual opioid overdose mortality rate) and even discussed road safety briefly, sharing research that proves states with medical cannabis laws have fewer fatal crashes involving opioids.

In addition to the opioid questions, Dr. Freeman, who is also the Medical Director for the Vermont Patients Alliance dispensary in Montpelier, shared additional structural challenges with the medical marijuana system:

— Physician reluctance to refer to cannabis – Dr. Freeman suggested that while there is now evidence and peer-reviewed medical research to potential therapeutic applications of cannabis, many physicians are still unfamiliar with newer research and stubborn in perception of pot.

— Indications for use are still pretty limited – Dr. Freeman highlighted PTSD as a specific condition for which patients can qualify in other states, but not Vermont.

— Inability to administer cannabis in hospice or resting homes – many older Vermonters receiving care at home or in group facilities have no practical access to cannabis, even if they are eligible to register as patients.

— The application process is still too  cumbersome for patients – while Freeman noted the reduction of time for a doctor to sign a marijuana registry form had decreased (to three months), he poignantly made the comparison that for physicians themselves, it’s still “a lot easier to give someone Percocet than to give them cannabis.”

— Out-of-pocket cost – Dr. Freeman pointed out that insurance pays for opioids but not for cannabis and that, “No matter how many people are competing for cannabis, it still won’t be cheaper than opioids.” He went a step farther to suggest that the state of Vermont could actually subsidize the cost of medical marijuana as part of ongoing opiate reduction programs.

Dr. Freeman concluded by noting that there is not enough evidence to various public health benefits on the larger Vermont population, because there are not enough registered patients participating in the program.

Also in the afternoon, the committee briefly changed subjects and heard testimony from two officials from the Department of Agriculture to discuss hemp, seemingly a non sequitur on the agenda otherwise focused on discussion of medical marijuana. However, the testimony illuminated testing issues. For example, because it’s a controlled substance, the state forensic lab can test marijuana for potency, but unless there are legal changes, the State’s Agricultural and Natural Resources labs (like the new one being built at the Vermont Technical College in Randolph) could not legally test THC.

The next meeting of the Joint Legislative Justice Outreach Committee will take place on Friday, October 14 at the Vermont State House and will focus on home cultivation and processing. Review the day in chronologic order via @HeadyVermont live-tweets and follow on Twitter, Instagram, and on Facebook for the latest.