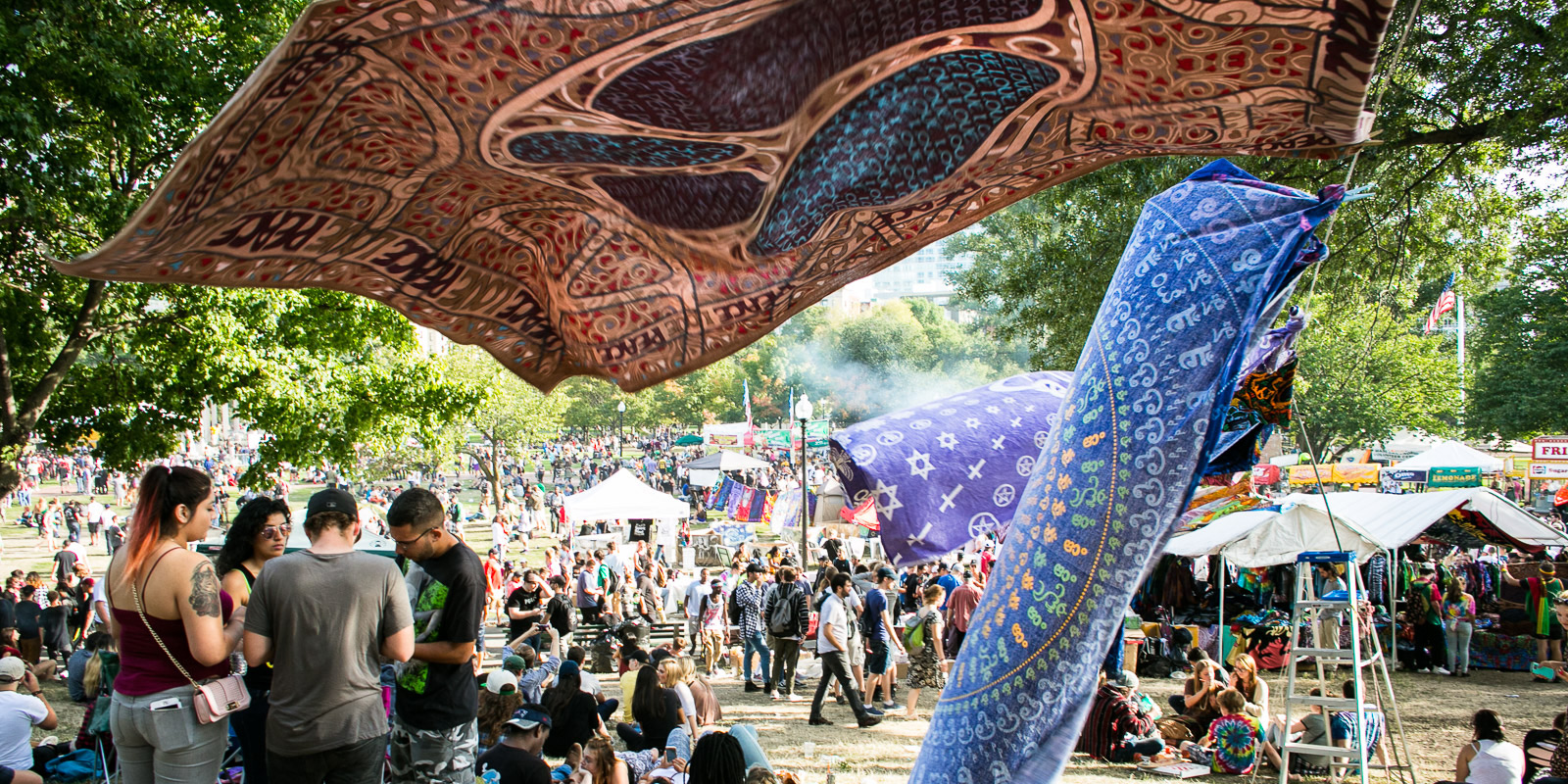 Tapestries flutter on a hazy breeze as 4:20 nears at the Freedom Rally in Boston Common on Saturday, September 17, 2006 in Boston, Massachusetts. By Judd Lamphere for Heady Vermont.

BOSTON, Mass. — Statements could be seen in the clouds at the 2016 Freedom Rally held in The Boston Commons this past weekend. Massachusetts pot smokers expressed their demand for change by smoking in the shade Saturday under the relatively peaceful nose of Boston Police on foot strolling through the park, helicopters flying above and bike patrols encircling around the perimeter. Sunday, much to happy delight, the rain never arrived and instead park potgoers were treated to a performance by Method Man and Redman. Under heavy clouds, an atmospheric layer of cannabis haze formed over the northwest edge of the park at 4:20 PM. But as soon as Method Man and Redman dropped the mic some unfriendly clouds began to appear.

The City of Boston sent in their cleanup crew shortly after six p.m. and the clouds turned dark and the wind began to gust. From the Soldiers and Sailors Monument dirt kicked down the hill where, moments earlier, thousands of people had sat and smoked. Anyone left sitting within a hundred yard radius was dusted. Amongst those in attendance left, still enjoying their public toking, the message from the Boston Police was clear: “We let you have your fun. Now go home.”

When the smoke came my way, I had been smoking a joint with a few of the city’s homeless and a couple travelers at the bottom of the hill. They were watching the crowds pass, hoping for a few nugs, roaches or edible leftover kick downs. Halfway through the passing, I gave my farewell, moments before the dirt cloud engulfed them.

“Closing time, you don’t have to go home but you can’t stay here.” Feeling the joint and the message from the city, I only lacked a soundtrack. But with Semisonic in my inebriated head, I headed for the T, to return to where most smokers are accustomed to partaking: Home.

The soundtrack from the Freedom Rally over the weekend, though, was unmistakable. “Vote Yes on 4” sounded off from the stages, vendor booths and campaign peddlers amongst the masses. Young faces encouraged other young faces to register to vote and, most importantly, educated rallygoers on the implications on legal cannabis in Massachusetts.

The low tax on legal cannabis in Massachusetts was a hot topic of conversation at the Rally. The Bay State’s proposed rate stands in stark contrast to Oregon and Washington, where the taxes for customers at recreational cannabis dispensaries are set at 25 to 27% and 37% respectively. Yet, the passing of 4 in Massachusetts recreational dispensaries only would tax the local cannabis enthusiast 3.75% on top of 6.25% sales tax, making the total state tax for cannabis an even 10%. For those who have been buying off the black market, this won’t result in prices that many in Oregon and Washington have deemed too high.

Proponents argue that the low tax rate brings not only safer and more reliable suppliers, but also a broader variety, and for most, a more competitive product. If 4 passes, they say, state of Massachusetts will be set to see local and legal growers step up to knock out product coming in (illegally) from outside the Commonwealth.

Massachusetts native and Senior Cultivation Editor Danny Danko of High Times has a confident view on cannabis legalization at home. “Costs of cannabis are going to come down precipitously after legalization,” Danko said in an interview. “Most of the cost of production is in the risk, and in the absence of risk, it doesn’t cost much to produce. The glut of flowers produced will drive prices down over time in my opinion. The state will make plenty in taxes.”

Of course the counterargument dissidents provide is that with a low tax comes less revenue. But one need to only look to high peaks, clouds and profits in Colorado. The Rocky Mountain State, with a 2.9% sales tax on top of a 10% recreational totaling out at 12.9% for those wishing to indulge, seems to be doing alright. In 2015 the state pulled in $135 million in taxes from $996,184,788 in sales. At just under a $1 billion, that’s a monetary statement that’s hard to ignore, particularly when it’s going into education and other much-needed areas.

The ballot for Question 4 is quickly approaching, and an understanding of the likely effects of legalized cannabis on Massachusetts communities is paramount. For most cannabis users, proponents argue, legalization will create a safer environment and improved market. Over the summer, the Boston Globe reported, the results of a poll conducted by Gravis Marketing for conservative political action committee Jobs First showed that 51 percent of those contacted said they’ll vote against legal marijuana, 41 percent said they’d vote for it and nine percent were undecided. The general public must decide on their own, when they get to the voting booth six weeks from this coming Tuesday.