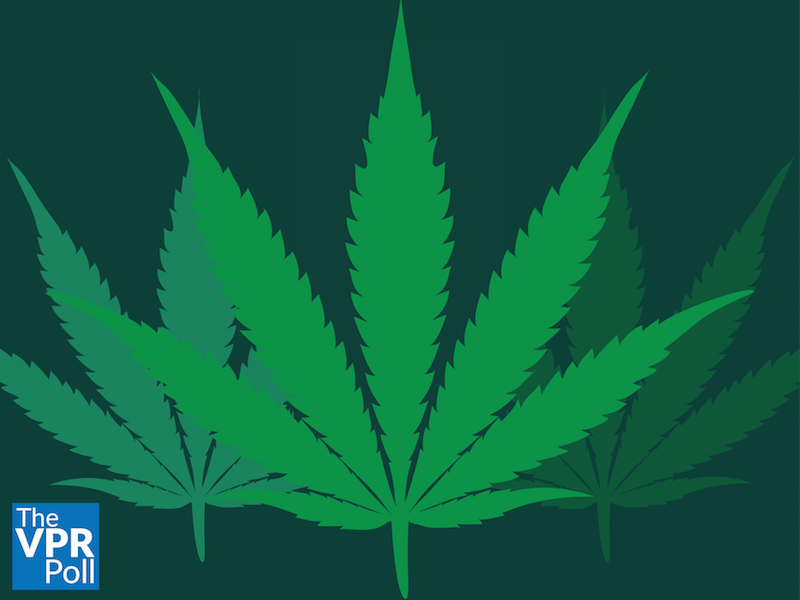 BURLINGTON, Vt. — Last Wednesday, Vermont Public Radio released the results from its latest statewide poll, conducted in collaboration with the Castleton State Polling Institute. According to VPR, “the total number of completed interviews is 637 (309 landline and 328 cell phone)” and “the margin of error is (+/-) 3.9 percentage points at the 95 percent confidence level for data representing the entire sample.”

Disclaimer: This headline already may have already made it seem like the following is making a big deal out of a single poll, but don’t make too much out of a single poll conducted in the dog days of July. If you want to get involved and are looking for a job in legalization politics, the Marijuana Policy Project is looking for a part-time grassroots organizer in Vermont, a paid hourly gig that even includes a commission.

Now here are three messages from reading the cannabis leaves of the latest VPR poll and — spoiler alert — they don’t necessarily bode well for legalization efforts in 2017:

1. Turnout in the August 9 primary election will be extremely low, which favors incumbents in House and Senate races and those with greater name recognition in statewide races.

When 30% of respondents say they are either ‘not very likely’ or ‘not likely at all’ to vote, and only 7% say they’ve voted via early absentee voting (you can vote by mail or at your town clerk right now), it affirms the case recently put forward by Fmr. Burlington City Counselor and Democratic Party politico Ed Adrian that ‘Summertime Isn’t Voting Time.’  [To learn more about where your local candidates stand, view the Heady Vermont Voter Map and check the latest Marijuana Policy Project (MPP) VT voter guide.]

At the statewide level, Dave Zuckerman showed some impressive statewide name recognition in his contest with Shap Smith and Kesha Ram, both of whom have more Democratic establishment support than Zuckerman. In the Democratic Gov. race, Sue Minter had 58% of respondents who either thought she was “very favorable” or “somewhat favorable”, which put her ahead of both Matt Dunne and Peter Galbraith and tied her with Republican front-runner, Phil Scott. The even better news for Minter is that she beat Dunne in favorability among Democratic respondents by nearly 20 points. Here’s what Sue Minter most recently said RE: legalization two weeks ago during her Reddit AMA interview.

2. People are REALLY concerned about opioids and drug addiction issues, which might further hurt marijuana legalization

After the economy/jobs/cost of living and ‘other,’ Vermonters said “Drugs” were listed as the next most important issue for Vermonters, with almost 20% listing it as ‘the most important problem facing Vermont. That means that the “We-already-have-a-drug-problem-so-we-shouldn’t-legalize-marijuana” line will be heard from opponents of legalization — even worse, concerns about “Drugs” could be used by more moderate politicians, such as Gubernatorial Candidate Phil Scott, to further stall movement on marijuana legalization.

Speaking of Phil Scott, the VPR poll shows that he has by far the best name recognition with 86% of those polled “aware” of him and 58% whose opinion of him is either “very favorable” (26%, the highest of all candidates) or “somewhat favorable”, numbers that put him far ahead of his Republican Primary opponent, Bruce Lisman. Phil Scott has never been high on marijuana legalization and most recently told VPR that he still believes, ‘Not right now, we don’t have enough information yet.’

3. A majority of Vermonters think that a referendum is the best way to legalize, but might not understand that referendums don’t make laws.

The big problem? The Vermont Constitution prohibits creating laws from referendums. It literally states that “only the General Assembly has the authority to enact legislation.” So, no matter what kind of legalization referendum is passed, and no matter how large the margin, a law would still have to go through the House and Senate to become law. Both supporters and opponents of legalization could put a non-binding referendum on the ballot (which 73% of Vermonters support), but passing a referendum is literally voting to wait at least another year.

More about downsides of a referendum in a future editorial, but it basically turns a public conversation into a too-simple, thumbs-up, or thumbs-down vote. With the legislative process, you can work through issues publicly and find compromises. With a referendum, the public is asked to vote “yes” or “no” and really will have no influence in how that yes/no question is formed. In Washington in 2012, the referendum was so divisive that pro-legalization people aggressively opposed other pro-legalization people and their legalization bill almost didn’t pass. Watch, “Evergreen: The Road to Legalization” on Netflix to see why legalization referendums can be really bad.

In Ohio, a line was finally crossed in just how bad the legalization terms would be and a huge number of pro-legalization voters helped defeat the legalization referendum in November 2015. That referendum would have legalized marijuana for adults, but also would have created a monopoly for a small group of investors — that infamously included a former boy-band singer and former NBA player — which voters couldn’t stomach. That group of wealthy Ohio investors and referendum supporters even spent over $21.5M on the campaign, and still lost because the majority of pro-legalization supporters voted against a bad referendum.

More importantly, the VPR x Castleton poll has shown that the majority of Vermonters have already supported legalization for each of the last three years (57%, 54%, and 55%).

To reiterate, if Vermont has a non-binding referendum, the public won’t have any say in putting together the referendum language and will likely end up having to choose between a bad bill or saying ‘no’… And it still won’t matter because the legislature will still have to create and pass a bill which might look nothing like the referendum itself.

While it is just one poll and it comes with a 4% margin of error (with respect to the professional pollsters at Castleton and VPR), the signs from reading the leaves on this poll show a potentially slow and rocky path forward for legalization. It’s already been proven — by the same pollsters — that the majority of Vermonters favor legalization, and have for at least the last three years. The real questions for the Primaries next week (August 9) and the General Election in November are “who leads the charge?” and “how does the process move forward?” and those questions will have to be answered at the ballot box, not in the polls or by the press.