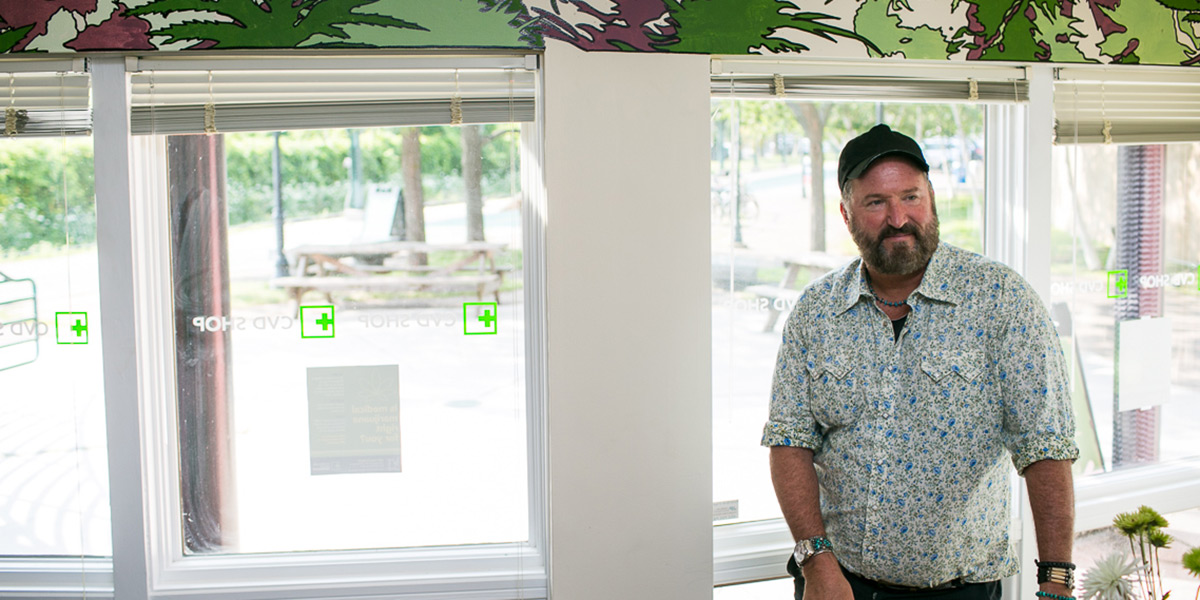 Retail Operations Manager Chris Copley at the CVD Shop on the Bike Path at 1 Steele Street in Burlington, Vermont on Wednesday, July 20, 2016. by Monica Donovan for Heady Vermont

BURLINGTON, Vt. — Splashed across the broad side of the Wing Building and greeting southbound travelers on the Burlington Bike Path, the new, highly visible — and publicly accessible — CVD Shop on Steele Street beckons the public to “Learn, Support and Shop” — medical marijuana, that is. On the way in, one might notice the tongue-in-cheek vintage propaganda posters adorning the wall, along with an eclectic variety of display cases bearing a mix of glass paraphernalia, locally made gift items, health supplements, books, drinks and snacks.

Small but carefully curated, the Shop, says Retail Operations Manager Chris Copley, is intended to educate the public on medical cannabis, taking a multi-tiered whole-body wellness approach. “The selections that we have all tie into getting people healthier, whether they need medical marijuana or not. You’ll hear me talk about health and wellness as a foundation,” he says. “But marijuana and CBD are products we’re knowledgeable about.”

CVD Shop, a public-facing expansion of the adjacent Champlain Valley Dispensary, quietly opened on July 3, without so much as an ad in the local paper. The shop, however, situated on the bustling bike path on one of the biggest holiday weekends of the year, attracted a steady stream of visitors in its first few days. “The response has been tremendous, it’s been really great,” says Copley, an initial investor in CVD who jumped into the operations side two months ago to help launch the retail shop.

The main display inside the store showcases CBD and hemp products, a selection of vitamins and supplements from Healthy Living, Urban Moonshine tonics, and other health-focused items. “You can eat an all organic diet but if your body doesn’t seem to like it or take it in, it’s not any good,” says CVD Executive Director Shayne Lynn. “So how do you really start to get your body in a place that it can actually listen to all the good things that you’re eating?”

The focal point of CVD Shop’s offerings is CBD-only products from Mary’s Medicinals, a Colorado-based startup that owns the patent on transdermal cannabinoid patches. Mary’s, says Copley, is one of the most cutting-edge companies when it comes to CBD. “They’re one of the industry leaders on ‘healing without the high,’ where the CBDs are such beneficial compounds for athletes all the way to people who are very elderly, it runs the whole spectrum,” he says. “There’s some really transformative stories about how powerfully these changed people’s lives and helped with pain management.” Hemp-derived products, loosely categorized as having below .3% THC, may be sold to the willing public and do not require a medical card.

Champlain Valley Dispensary, two doors down, is Vermont’s only official Mary’s Medicinals retailer, carrying the full line of THCa, CBN, Sativa, Indica, CBD:THC 1:1 and CBD patches. Because cannabis products can’t be shipped across state lines, retailers purchase the patented transdermal packaging, and then apply their own active cannabinoid products to the patches before sale. There are a small handful of other retail (non-dispensary) outlets in Vermont that currently sell hemp-derived CBD products.

As of April, 68 percent of dispensary patients were registered with either Champlain Valley Dispensary or its sister store Southern Vermont Wellness.

Lynn says that people can use CBD products as a starting point in exploring medical marijuana. “What is that ideal combination for some people? Everybody’s different,” he says. “So this is where you start at least, and if you want to go to that next place, we can introduce you to the dispensary, help you get signed up and walk you through the process.” Lynn admits that the application process can be daunting, and that part of CVD Shop’s mission is to educate people on the current status and complex web of regulations clouding the path to becoming a medical card holder in Vermont. “Getting a doctor, completing the forms, the picture, mailing it in … You got to be pretty dedicated to be wanting a card. We want to really educate people on the process and the what it’s going to how long it’s going to take and what are all the steps.” In a previous interview, Lynn indicated that the dispensary often received visits from non-card holders seeking information, but had to turn them away due to the strict rules surrounding dispensaries.

Vermont, which failed to pass recreational cannabis and home growing measures in the House earlier this year, did manage to pass landmark medical marijuana changes via S.14, which, among other items, added chronic pain to the list of qualifying conditions and shortened physician-patient wait time from six to three months. It did not, however, allow for additional dispensaries to address the increase in demand for medical marijuana. Since the registry went into effect, the number of applications received has steadily increased, with the past four months seeing an historical peak in applicants.

Initially, dispensaries could only serve one patient at a time by appointment. CVD can currently serve two patients at a time, and will soon be able to serve three. Lynn says that he plans to expand the southern dispensary in coming months so that it can also serve additional patients, and that they will be adding a public-facing store similar to CVD Shop, but in Brattleboro.

In Burlington, Copley says, CVD Shop will offer seminars on a variety of topics, from opioid addiction to CBD to legalization and basic medical marijuana information. “There’s so many different seminars that we could hold, but for us, we feel like we are this information portal where we can really connect people,” he says.

The new storefront location, in the heart of the Burlington waterfront and eventually the expansion in Brattleboro, along with the emphasis on outreach and the “Learn, Support, Shop” line will attract new patients both to the registry, and to CVD and SVW, the two nonprofit medical marijuana dispensaries managed by Ceres PM, which presently possesses 50% of the four total Vermont medical marijuana dispensary licenses and serves 68% of the state’s roughly 3,000 patients.

While both the CVD Shop and the CVD dispensary continue to be hampered by legal restrictions as they break new ground on medical marijuana in the Green Mountain State, the risks — and rewards — could prove enormous.