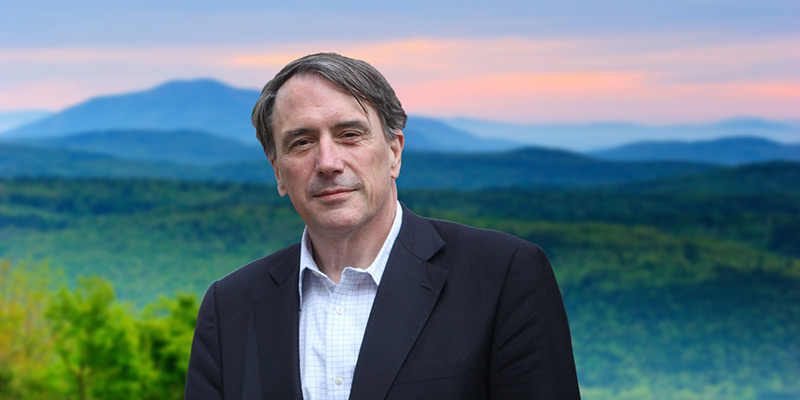 BURLINGTON, Vt. — Throughout his career, Peter Galbraith has held multiple titles, including U.S. Ambassador to Croatia, Advisor to the Kurdish Regional Government, and United Nations’ Special Representative to Afghanistan. Closer to home, he served as State Senator of Windham County, which he represented from 2011-2015 before deciding in March of this year to seek the Democratic nomination for Governor, joining candidates Matt Dunne and Sue Minter.

Politically, Galbraith is a Progressive Democrat whose stated campaign platform in 2016 is built on Bernie Sanders-style populist planks, such as a $15/hour minimum wage, a curb on special interest and corporate lobbying in Montpelier, and free tuition for Vermonters at Vermont State Colleges. He is also known for his bluntness and sometimes confrontational style in handling both opponents and those he sees as less informed. These features have not necessarily endeared him to the establishment in Montpelier, nor spared him from press scrutiny. The Burlington Free Press recently dubbed him “The Privileged Progressive,” referring to his cosmopolitan upbringing, personal wealth, and political goals to help Vermont’s poor and provincial.

When it comes to legalization, Galbraith has been clear about not only his support, but the reasons why, recently telling Vermont Public Radio that he thinks legalization will make marijuana harder for young people to obtain, that regulation and testing will protect consumers, and that the state can bring in revenue.

To get further into the details and questions specific to cannabis, Heady Vermont Editor Eli Harrington recently spoke to Peter Galbraith at length about additional legalization details, home growing, and why he would structure the taxation similar to alcohol.

HEADY VERMONT: Where do you see potential home cultivation fitting into this, whether it’s strictly personal, or if there is a chance to have some sort of small scale producer and how we get there?

PETER GALBRAITH: Well if the product is legal, they should be able to grow it at home for their own personal consumption, but I don’t think that they should then be selling it out of their house. So I think that the sale of marijuana, like the sale of alcohol, should be through licensed retail outlets and I think that’s important for three reasons: one is to keep it out of the hands of minors, just as alcohol is kept out of the hands of minors, to some degree; secondly, to ensure the purity of the product; and third, to ensure that the state makes revenue off the product.

My view basically, is that we ought to treat marijuana like alcohol. They’re both drugs, they’re both widely consumed, they both have some ill consequences, especially when they’re overused.

HEADY VERMONT: In the future, would you support exploring a way for small-scale cultivators to gain access, whether it’s through small growers going through a centralized processing and testing system or cooperatives — do you see that being a potential in the next, let’s say, five years?

PETER GALBRAITH: Yes, I mean I think that’s something we should look at — again, my criteria are: can we ensure the purity, the consistency in terms of strength, can it be kept out of the hands of minors, and can we be sure that the state earns revenues. How the product is produced isn’t necessarily inconsistent with those goals, so cooperatives, individual people growing it and then selling it to a licensed outlet or to a cooperative that would then sell it to a licensed outlet, sure, I think that’s absolutely a way it could go.

I don’t see any reason to have large industrial marijuana growers.

I think it can also be produced by individual growers, but again, it has to be regulated in a way to make sure it’s not being diverted to the use by anybody except personal use and that the state is getting the revenues that it should get and that minors are not getting it.

HEADY VERMONT: How would you use those revenues if you had total carte blanche to slice up 100% of any cannabis-derived taxes that Vermont would take in in the future?

I would treat them exactly the same way that we treat alcohol taxes, which is to say, they should go into the general fund and support the public services of the state.

Obviously, the state will have additional expenses in terms of regulating the production and sale of marijuana, as it does with alcohol. It would have a public education function for the use of marijuana, as it does with alcohol, but the whole enterprise also ought to be generating additional revenue for the state … My view is that it should all go into the general fund and the state should appropriate whatever money is necessary to cover public safety and education, just as it does with alcohol and with many other things. But of course, marijuana should be a money-maker for the state, it should not be that it costs more to regulate it, more in terms of public safety, more in education, than the taxes generated – that would not make sense.

HEADY VERMONT: A huge presence in this conversation is law enforcement, DPS (Department of Public Safety) oversees the medical program, which is part of why it is so conservative, but they were a big impact during the session and even with getting 25% of revenues, they were still staunchly opposed. So understanding that this is something where the will of the people have expressed support of legalization and law enforcement is very much against it. How do you propose that we can work with law enforcement if you are elected, to align their concerns with the overwhelming majority of Vermonters who want to see this happen?

PETER GALBRAITH: Well the first point I would make is that law enforcement works for the state, they work for the people of Vermont, and if the people of Vermont, in their wisdom, through the election of their legislators and their governor, decide that this should be a legal product, and that it should be regulated, then it’s for law enforcement to carry out the decision of the elected representatives.

However, law enforcement has very important perspectives on the issue and they should be listened to so that whatever regulation and public safety programs exist are done in the best possible way.

HEADY VERMONT: Road safety-wise, what would be your approach be understanding how the conversation has unfolded and what the concerns are?

PETER GALBRAITH: First, I don’t believe that legalization is going to lead to more drugged driving. Vermonters are already driving stoned and there still is no real test to determine it, so legalization isn’t going to change any of that. In fact, with more education, just as we have with drunk driving, perhaps we will get people to do less in terms of drugged driving and be more responsible. And of course, we should continue to try and devise a very inexpensive and high-quality test to determine if someone is stoned.

But this debate about road safety has generally been framed as if somehow legalization was going to lead to people now using marijuana as if they hadn’t been using it before and driving stoned. And the whole point about legalization, even by people who raise the issue of drugged driving, the whole point is that prohibition hasn’t worked and that people are already engaging in these behaviors, including dangerous ones like driving drugged.

PETER GALBRAITH: I’m open to having more dispensaries, I don’t see why it should be a for-profit model. The current system was set up basically on an experimental basis, and it made sense on that basis to have a limited number of dispensaries but this was not based on any scientific evidence it was just, if you’re going to take this step and legalizing a previously-illegal product for medical purposes, we want to do it in a way that you can control it, hence the limited number of dispensaries.

To some degree, this issues is analogous to the debate over same-sex marriage, which began with civil unions, which was a very cautious, mild step. And then a few states, including, I’m very proud to say, Vermont, legalized same-sex marriage and then eventually it spread very rapidly across the country what began as a very cautious experiment became something that was broadly accepted.

As marijuana legalization, and as medical use of marijuana, becomes broadly accepted, you would think about expanding the dispensaries.

Galbraith’s signature directness on the questions represent his stylistic difference from his political opponents, who support legalization, but are less willing to speak as plainly as Galbraith on the details: “treat it just like alcohol,” “if it’s legal, you should be allowed to grow it for yourself at home,” and “I don’t believe legalization will lead to more driving stoned, it’s already a problem now…”

Galbraith’s directness on the issue should resonate with many Vermonters in the hills and towns around the state who see the issue as a relatively simple one and generally support changing the status quo: “Legalize it and tax it already, we need the revenue and the status quo no longer makes sense.”

With turnout for the August 9 primary elections (Vermonters can already vote right now) expected to be low, Galbraith’s pragmatic stance presently sets him apart from his Democratic opponents on what is already one of the signature issues of the 2016 election. Will his progressive (if not privileged) stance be enough to propel him past his Democratic rivals in August? Stay tuned.