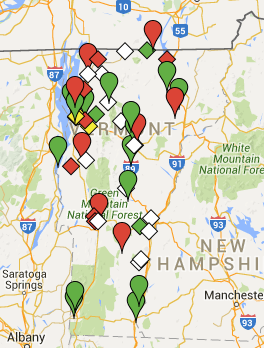 BURLINGTON, Vt. —In the state that ranks #2 in the United States for monthly marijuana users and #3 in the nation for annual marijuana users (via High Times), cannabis reform questions continue to lift interest in local and statewide political races. And since Vermonters can start casting official ballots for the August 9 primaries as of June 24, campaigns are increasingly being asked to clarify cannabis positions at ‘meet and greet’ events, garden parties, town parades, and on dozens of ‘blank for VT’ Facebook pages throughout the state.

Therefore, Heady Vermont is proud to announce two #vtpoli projects: The first is a series of profiles for statewide candidates where we spend 15 minutes or more getting into the details with major candidates. Back in April, we interviewed Lt. Governor Candidate Kesha Ram and last week we interviewed gubernatorial candidate Peter Galbraith, whose interview will be published in coming days (make sure you’re signed up for Heady Vermont email list to get all the latest stories).

When it comes to the Governor’s race, Vermont Public Radio has been leading the cannabis coverage thus far, having already hosted five, 50-plus minute “Meet The Candidates for Governor of Vermont” interviews on Vermont Edition, accompanied by an online ‘Ask Me Anything’ question series (shout out to /u/taylordobbs). To highlight some of the sexier campaign issues, VPR also released each candidate’s take on Guns, Taxes, Marijuana and Health Care. For a 2 minute snapshot of where the candidates stand, check the following excerpts from VPR: Sue Minter – Matt Dunne – Peter Galbraith – Phil Scott – Bruce Lisman

As important as the executive branch will be to the future of cannabis policy (especially considering the influence of the six state agency heads and 21 commissioners appointed by the future governor to lead Public Safety, Taxes, Agriculture, Transportation and more), we’re also paying close attention to the legislative races, putting a microscope on both State Senate and State Representative races all over the state.

To provide Vermont voters with the most thorough and detailed candidate guide in these local races, our second #vtpoli summer project is an interactive map of digital candidates and their policy positions on cannabis. The diamonds represent new candidates for an office, while the circles represent Senate incumbents; those white diamonds are candidates who have yet to respond or whose stance we’ve yet to track down.

The methodology for determining a red/yellow/green ranking is based on a combination of past votes, stated campaign positions, responses at public forums, and the results of in-person interviews. All candidates are being asked the same cannabis (marijuana) survey questions, the full responses to which are posted online, starting with the State Senate race. Candidates or members of the public wishing for an explanation on any of the rankings can email news@headyvermont.com or contact us via the Heady Vermont facebook page, or on Twitter.

Along with Heady Vermont and traditional Vermont media outlets. the Marijuana Policy Project (MPP) sent out a brief survey to candidates to all candidates as part of their annual voter guide, to be released in mid-July. On the other side, statewide marijuana opposition group SAM-VT recently resurfaced in a VTDigger commentary to claim victory and thank Vermont politicians.

However, new Vermont medical marijuana patients are already benefitting from the S.14 updates and that number of patients could double or even triple in the next year according to a recent MJBizDaily interview with Champlain Valley Dispensary Executive Director Shayne Lynn. Patient advocates and grassroots networks, such as Vermont Home Grown, had a strong impact in 2016 and remain active during the summer season, closely watching the stances of candidates and the progress of nearby states.

With Vermonters already casting ballots for the August 9 primaries, advocates, media outlets, and private citizens continue to question candidates about not only the “if” questions, but the “how” questions when it comes to cannabis reform — including stances on home grown, the opening of more dispensaries, allocation of tax revenues, and more. As temperatures rise and neighboring states place the question at the top of their own ballots, Vermont candidates can continue to expect elevated interest from constituents.

Find out more about voting in Vermont via the Secretary of State website.