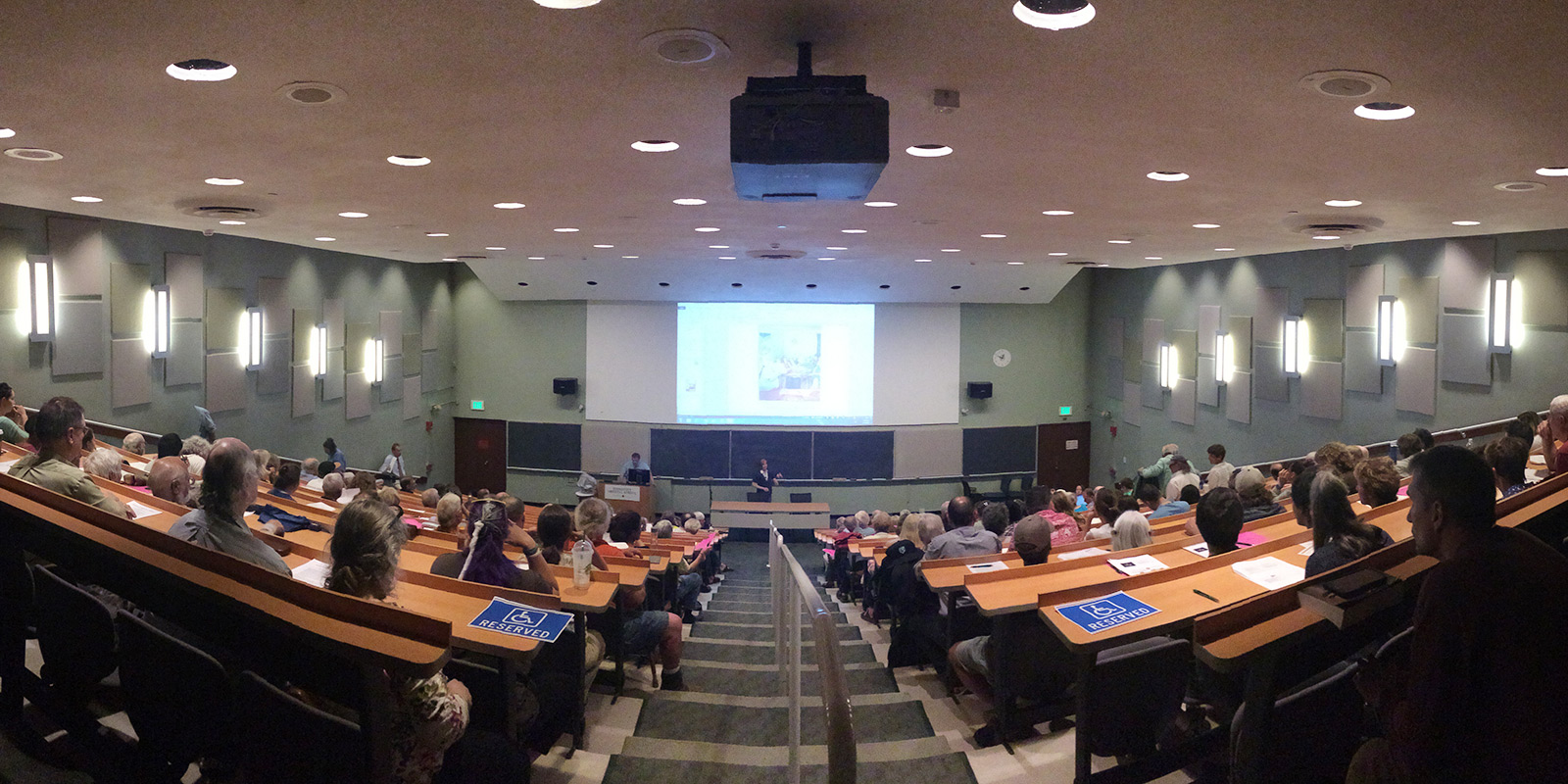 Medical cannabis lecture at the University of Vermont on Tuesday, June 7 2016

BURLINGTON, Vt. — Thanks to the University of Vermont, summer school has never been so popular. In the stretch of 18 hours, there were two different free courses available to the public, one taking place in person on Tuesday evening at UVM with roughly 160 attendees, and the other taking place online on Wednesday with 60-plus students logged in.

One of the biggest obstacles facing cannabis reform movement(s) is that after more than 70 years of Prohibition and cannabis’ status as a Schedule I drug, academic and research institutions have largely been restricted from conducting the kind of in-depth and long-term studies that scientists (and policy-makers) weigh most heavily upon. With an engaged population eager to get trusted information about cannabis, both courses were heavily attended and included intense discussions among attendees — some of whom questioned presenters and shared alternative counter-points, some anecdotal, some from additional scientific research.

Dr. Karen Lounsbury, Ph.D and Dr. Wolfgang Dostmann, Ph.D., both professors in the Department of Pharmacology at the University of Vermont, presented at the Tuesday evening session, and Dr. Lounsbury led the Wednesday online webinar. She made it clear that, although much of the public’s previous understanding of cannabis has come from (mostly illegal) experience, the UVM courses are only based on accepted science:

We make it clear right at the beginning of our course that we have a responsibility to focus on evidence-based medicine. That doesn’t mean that there aren’t wonderful things that might happen with cannabis-based medicine in the future, but we have to be conservative in our presentation of the accepted medical uses.

Wednesday afternoon’s session was the second in a series of five free webinars taking place this summer. While the first session had focused on the botany of the plant, the second of the online courses focused on the pharmacology of cannabis. Deftly shifting between technical medical terminology and simplified explanations, Lounsbury addressed topics such as the difference between THC and CBD receptors in the body (CB1 vs. CB2), the endocannabinoid system, and the effects of THC and CBD on receptors in the brain.

Lounsbury also presented slides about the effects of cannabis on the ability to drive, highlighting the more serious danger to inexperienced users. She noted that motor coordination was much less impaired from cannabis use than with alcohol and when asked from a participant (this one), affirmed that testing motor coordination would likely be more effective for testing cannabis impairment than the blood/saliva testing technologies still in development.

Both the presentation and participant questions addressed

comparisons of opiates and cannabis, and general questions about addiction and the relative impacts of various drugs. The opiate epidemic and the potential for cannabis as a “gateway drug” have frequently been talking point for anti-legalization proponents in Vermont. In her presentation, Lounsbury included a slide outlining the advantages of adding cannabinoid to opioid regimens for pain management.

More from our interview with Dr. Lounsbury:

With the in-person session last night in particular, I know the audience tended to be older — many of those in this demographic (including members of the legislature) have hardened opinions about cannabis. Do you think that as a scientist and professor, you have a unique opportunity to clarify cannabis misperceptions for older Vermonters?

Most students in the formal class and in the community audience support the use of medical cannabis and don’t have a strong negative opinion of adult use; Remember that our current senior citizens were teenagers in the 70s. We have had very little negative response to our presentations of medical cannabis and I find it very rewarding to provide clear scientific information on a topic that is so clouded by propaganda on both sides of the issue.

The University is leading the way with public education in the state in this field. Do you feel that this topic will continue to grow in popularity and that these courses might further affect public opinion in Vermont?

I think that public opinion is key to driving legislation related to legalization of medical cannabis in other states, and I fully support better access to higher quality cannabis medicines in Vermont. To be honest, however, I have reservations about the legalization of adult recreational use, but that is mainly due to the fact that greed for quick profits may have negative impacts on our State’s reputation and on the quality of the cannabis.