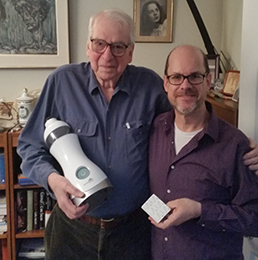 Episode 2 — With good reason, the Massachusetts-based startup, CannaKorp, has been gaining a great deal of national attention in the press lately for their innovative approach towards vaporization. The first devices are slated to appear in Colorado in 2017, but even with plenty of buzz — and $1.6M in angel investment, 60% over the goal — there are already misconceptions and skeptics when it comes to the device and system.

It seems almost inevitable in 2016 that we’d see a ‘k-cup for weed’ system. In fact, in 2015, some West Coast patrons could buy infused coffee K-Cups that work with existing Keurig machines. However, the CannaCloud system is patently different in that it is actually a vaporizer (a ‘Volcano’ vaporizer is the closest comparison) and was inspired by the  experiences of the inventor, Michael Bourque, as he first started using therapeutic cannabis for the first time in his 40s.

Bourque first considered cannabis later in life after a natural doctor suggested he consider it for dealing with some mid-life anxiety. Without dispensaries, a dealer, or any background in cannabis, the professional, strait-laced family man set out to educate himself before setting out to score on the street. After a bad first experience smoking his first joint as a middle-aged man, he almost wrote off cannabis completely.

However, everything changed for Michael Bourque after he learned about vaporization medical cannabis and he first truly experienced the therapeutic potential of cannabis. Eventually, this lead to Bourque learning about different strains, growing his own preferred meds, and eventually realizing that with his background as a machinist and product developer, he could design a better option. That revelation led to a meeting with the legendary Associate Professor Emeritus of Psychiatry Dr. Lester Grinspoon at Harvard Medical School, who not only understood the concept, but helped advise Michael.

In the full interview, learn how this innovator and his team are changing the conversation on cannabis:

More about CannaKorp: TechInsider “The ‘Keurig’ for Marijuana is Finally Coming – and It Looks Amazing”