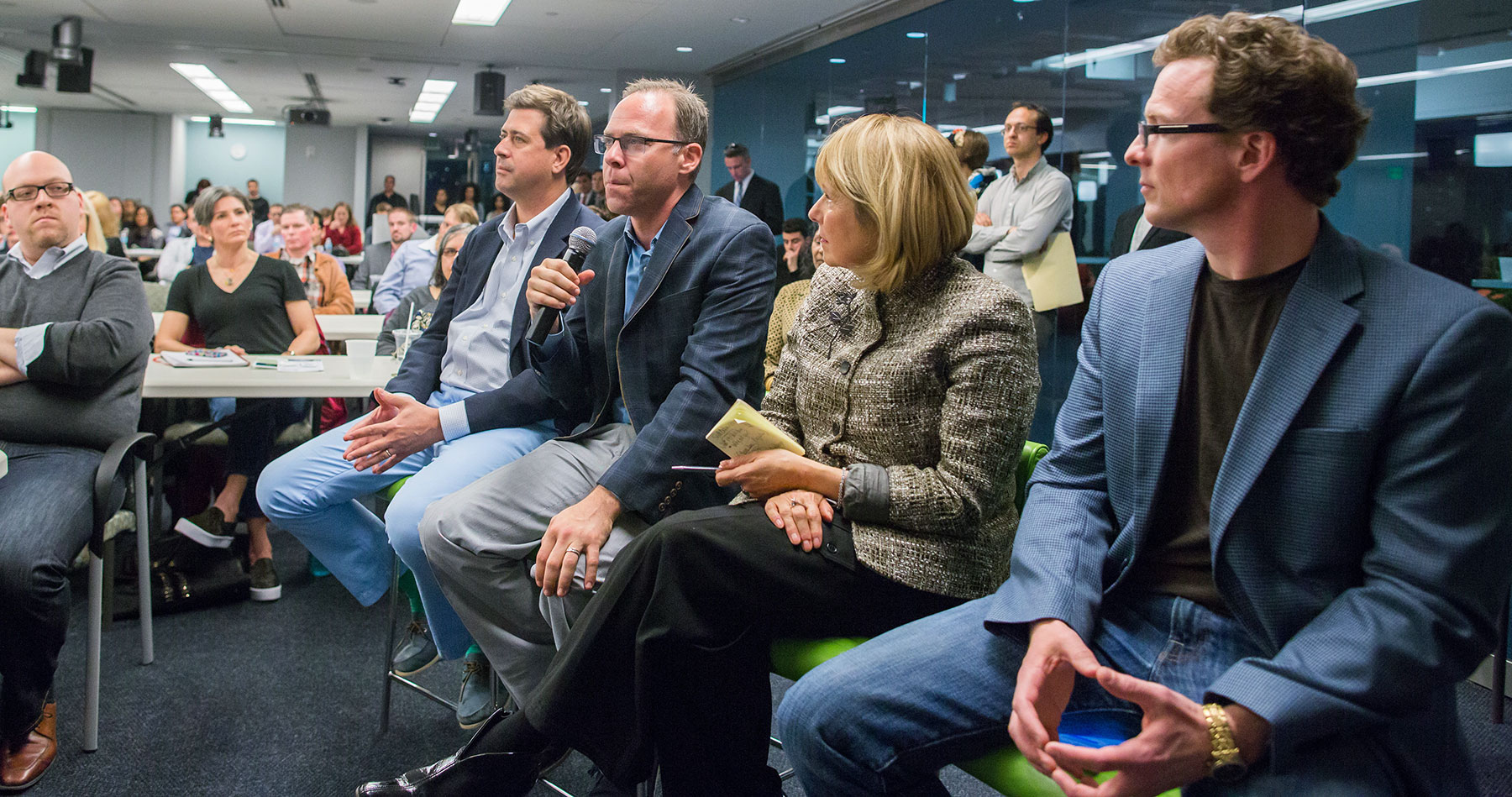 BOSTON, Mass. — During my most recent stretch living and working in Boston from 2012 through 2014, I coordinated professional exchanges with a nonprofit in partnership with the Department of State, and spent a lot of time with foreign professionals discussing and exploring some of Boston’s most highly-regarded industries. Inevitably, many of these meetings and program topics included phrases like, the “innovation economy,” “entrepreneurship ecosystem” and the “impacts of the startup scene.”

During that time, we’d have meetings with outfits like MassChallenge, the MIT Technology Licensing Office, and the Cambridge Innovation Center, all with the goal of helping these visiting policy-makers and entrepreneurs understand how to replicate this environment. There are good reasons for leaders from all over the world — including at home in Vermont — to want to replicate the startup scene in Boston. As the editors of Business.com highlighted last summer:

The startup cycle means big money is moving in and with that money comes high paying jobs, local investment and consumer spending. Where the business cycle used to take years to impact an economy, successful startup funding can take shape almost overnight and give immediate juice to the economy…

When you think about a startup scene, you might think about television shows like Silicon Valley, expensive coffee, over-dressed Millennials and bespectacled tech nerds. So to paraphrase Jon Stewart’s character in the classic movie, Half-Baked, “Have you ever seen the startup sector…on weeeeed?”

Me neither, and I wasn’t necessarily looking for it, but as a testimony to the heady times in which we live, our publisher stumbled upon a link to a meet-up event last month called #StartupHigh Boston presented by the Cannabis Society as part of the launch of a new cannabis trade association in Massachusetts called the Northeast Cannabis Coalition.

About #StartupHigh: The northeast United States is the epicenter of finance, media, medicine, institutional knowledge, education and prudent startups. #StartupHigh will showcase inventive companies and ignite the beginning of the cannabis industrial revolution in our region.

Our #StartupHigh event series will showcase the best and brightest from the northeast cannabis startup community. Join us to learn about the booming industry and see our Startup Showcase, where up and coming cannabusinesses will present their ideas and pitch to an impressive audience made up of industry experts, business owners, investors, and professionals from all walks of life.

Shanel Lindsay was one of the event organizers (along with Michael Latulippe) and serves on the board of the Northeast Cannabis Coalition (NCC). She is also the owner of founder of Ardent Cannabis, a company that manufactures the Nova Precision Decarboxylator, a tool for activating cannabinoids before making edible concentrates or for smoking/vaping cannabis. Lindsay explained the function of the network, currently mostly focused on Massachusetts.

“What we are is a group of activists, business owners, scientists, doctors, medical professionals, people who have come together to make this coalition so that we can be sure that legalization is rolled out the right way in the northeast.”

“What we are is a group of activists, business owners, scientists, doctors, medical professionals, people who have come together to make this coalition so that we can be sure that legalization is rolled out the right way in the northeast so that people have access to opportunities and that small businesses can grow and thrive,” she said.

Listen to more from our interview with Shanel Lindsay:

What struck me most about this cannabis startup event, from the time I first discovered it, was that it was taking place at the Microsoft NERD New England Research and Development Center in Kendall Square in Cambridge.

With MIT, the golden dome of Beacon Hill, and the sleek glass of the Financial District in the same panoramic view from the window overlooking the Charles River, cannabis was making an historic entrée into the literal and metaphorical heart of the startup sector.

With MIT, the golden dome of Beacon Hill, and the sleek glass of the Financial District in the same panoramic view from the window overlooking the Charles River, cannabis was making an historic entrée into the literal and metaphorical heart of the startup sector.

Upon entering, the setting inside matched its surroundings and struck the perfect tone for what a cannabis X startup strain could provide. The room full of 100-plus attendees was diverse, with the overall demographic skewing slightly younger and nerdier, but plenty of gravitas and grassroots sprinkling the room and balancing the nervous energy from those pitching their ideas to the judges and audience.

The polished setting included the social atmosphere, which lacked the ego or political jealousy that sometimes impedes the solidarity needed to more quickly move laws and developments. In a world that’s secretive at best and paranoid by default, it was nice to at least temporarily exist in a world where the questions of what was possible were not restricted to an arbitrary and insular legal environment.

The Mary Kay of Mary J

Next to the large presentation room was a hallway featuring sponsor displays from several companies, one of which was pitching, and two of whom were sponsoring. Ross Bradshaw was there to represent Healthy Headie Lifestyle, one of the sponsors. The company started out of a basement in Plymouth, Massachusetts and was inspired by the questions the founders were being asked by friends and family about cannabis (“What is the difference between Indica and Sativa, what’s wax, what’s shatter, what’s a vaporizer?”). To fill that gap, they train and deploy consultants who advise patients on all aspects of cannabis, including the history and politics. When asked about the necessity of cannabis companies participating politically, he explained that it usually happens by default and that for their consultants, it’s an outlet for them to apply their experience and knowledge in a legal framework to make a living.

“We find a lot of them (our consultants) are activists and the people who want to provide knowledge and power because they have a loved one, they have a friend that’s been left in the dark when it comes to cannabis. They have no means of getting this information so they hear about Heady Healthie Lifestyle and they see that they have a way to empower people, and they can make a living, make a part-time living selling these products.”

Listen to more from our interview with Ross Bradshaw:

In this broad and diverse growth industry where the rules and practices are still evolving, both Healthy Headie and Ardent are more established in the context of New England cannabis companies — with a few years of experience, they’re now the mentors. True to the stated intent of the network and innovation ecosystems at their best, much of the event was about these experienced newcomers supporting the next wave of cannabis entrepreneurs.

Joe Khoury of iRollie was one of the younger people in the room, but came to the event with his own bona fide entrepreneurial experience. He’s a current Junior at UMass Amherst who taught himself 3D printing while an intern at MassChallenge, the business competition that, among others, inspired similarly-designed accelerators in Switzerland, Mexico, Israel, and closer to home, the business competition, LaunchVT. In Western Mass, Khoury created and self-funded his company with leftover funds from an earlier investment, iRollie, a smartphone case that doubles as a portable rolling tray.

Khoury was grateful for the support his company received, as one of just 36 selected to participate in the Valley Venture Mentors Spring Startup Accelerator in Springfield, Massachusetts — a testament to the serious economic development potential for cannabis economies in New England cities looking for stimuli.

“I LOVE IT.  I can’t believe, the Microsoft NERD Center where we are, I came here with MassChallenge back in the day, when I was interning for them for an entrepreneurship event, and they’re the biggest in Boston,” he said. “It’s crazy to see that now, there’s such a big community just around cannabis entrepreneurship, that we can occupy the same space that the whole Boston startup ecosystem did, so I’m just absolutely blown away by the amount of people, the innovation going on, and the support in the local community.”

Listen to more from our interview with Joe Khoury:

But in any startup scene, entrepreneurship only works if there are investors and advisors to manifest ideas into businesses. The judges, combined, brought cannabis experience measured in both decades and dollars.

Kris Krane, one of #StartupHigh’s judges, is a principal and managing partner at 4Front Advisors, a medical marijuana dispensary consulting firm. He met his first business partners in college through advocacy while serving as executive director of Students for Sensible Drug Policy. Krane has dedicated his career to drug policy reform and is also an Associate Director and longtime member of NORML.

His firm focuses on emerging markets and helps companies secure licenses in states where marijuana laws are being reformed:

“We’re fairly narrowly focused on direct to plant businesses…we’re starting to get into the production side but really been focused primarily on the retail side process. But understanding the market dynamics, which markets are coming next, and how to navigate the application processes is incredibly important, that’s really been where we’ve built our reputation as a company. We’ve been successful winning licenses for our clients.”

Listen to more from our interview with Kris Krane:

Krane and others at the event have proven their success in multiple kinds of cannabis endeavors, and testifying to the speed of the industry, one of the companies pitching at the March 18 event, CannaKorp, just raised $1.6 Million for their Keurig K-Cup-inspired vaporizers. While the ‘green rush’ has been well-documented, it’s quite another thing to see it happening in real time, real close to home.

While the ‘green rush’ has been well-documented, it’s quite another thing to see it happening in real time, real close to home.

At events like #Startup High, the image of the cannabis industry is getting glossier: the Microsoft NERD Center is far from Bill Gates’ garage, just like someone pitching a ‘facebook for marijuana’ is far from a gardener perfecting his/her craft in an underground growing operation. Purists in every state complain that the chase for profits is clouding the bigger cannabis issues, such as criminal reform or medical patient access.

The fact is, that money talks, and for cannabis advocates, the market forces are helping to further the cause for reform. There is certainly a balancing point — see, Ohio — but with organized groups like Smart Approaches to Marijuana and their own Governor and Mayor working to publicly oppose marijuana on health and cultural grounds, Bostonians (and others) need all the help they can get.

Entrepreneurs are successful when they have a vision that others don’t, and can convince others to see that vision — part of why creative cannabis consumers can make excellent entrepreneurs and why ganjapreneurs are cloning and growing. As attendees of Startup High, and the foresighted organizers appreciate, the times are a-changin’ and tomorrow’s successful cannabis enterprises are being planned and built today.

Want to hear more? Check out Northeast Cannabis Coalition board members Nichole Snow and Michael Latullippe speaking at Heady Times: The Future of Vermont Cannabis at The Skinny Pancake on Tuesday, April 19 2016.