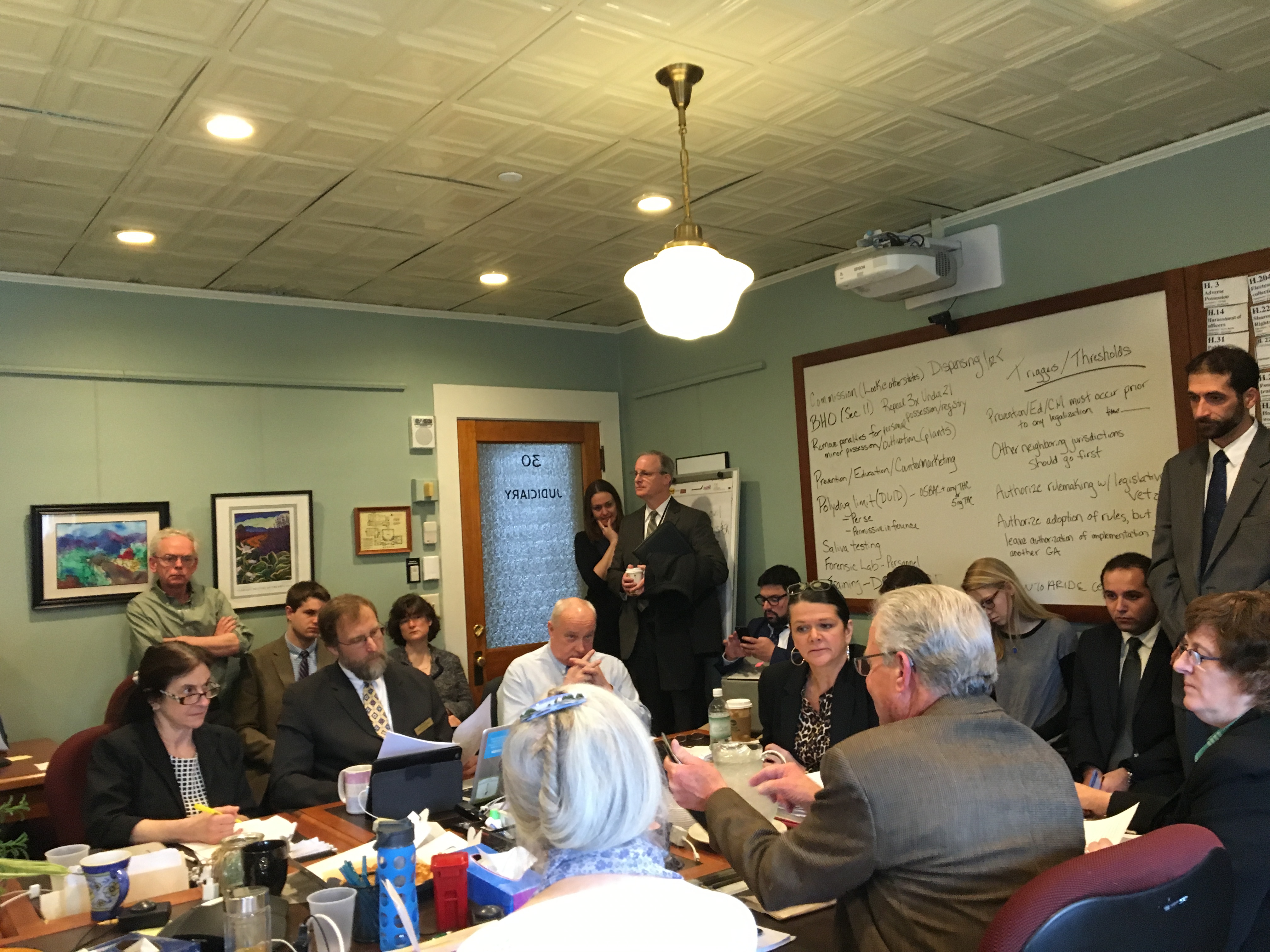 MONTPELIER, Vt. — At the beginning of the week, the House Judiciary Committee was set to vote on a version of S.241, the bill passed February 25 by the Senate. That bill, as passed by the Senate, would have eliminated any criminal penalties for possessing less than an ounce, and created a regulatory system that in 2017 could license up to 27 cultivators of various sizes, 15 retailers, and 5 labs, all of which could have theoretically started to operate by 2018.

By Friday afternoon, those provisions were only a pipe dream for legalization advocates who saw the House Judiciary Committee complete their full lobotomy of the aforementioned S.241 and approve a bill that barely smells like the cannabis reform passed by the Senate. In passing a heavily-amended version of S.241 the eleven-member Judiciary Committee appropriated “$350,000 for the marijuana prevention, education and counter-marketing programs”, and created a new Substance Abuse Program Manager in the Department of Health.

The bill also revised the definition of driving under the influence, lowering the B.A.C. to .05  if the person “has any detectable amount of delta-9 tetrahydrocannabinol in the person’s blood.” In terms of actually changing marijuana regulations, the provisions passed on Friday would allocate $150,000 to create a Marijuana Advisory Commission that would “report to the Governor and the General Assembly, as needed,” and issue some kind of recommendations by November 2017.

Click the link below to watch the full video of committee discussion and voting:

After more than three weeks of testimony — including a public forum in the House chamber on March 31 — the committee surprised some observers on Thursday by proposing a different ‘strike-all’ version that had eliminated the legal purchase, sales, or cultivation of cannabis, but would have classified home cultivation of two plants the same as possession of an ounce: a civil penalty starting at $200. Highlighting the divisions within the committee — and greater House — those provisions changing legalization to decriminalization failed on a 6-5 vote with Rep. Bill Frank (D-Underhill) casting the deciding vote, joining stated opponents of the measure, Reps. Tom Burditt (D-West Rutland), Marcia Martel (R-Waterford), Betty Nuovo (D-Middlebury), Vicki Strong (R-Irasburg) and Gary Viens (R-Newport).

For Rep. Frank, reached Friday evening by phone, his reason for helping to swing the vote came down to preparation and process:

“Our point was to take one thing at a time — it’s gonna happen sometime, and probably sometime soon, but I want to make sure we have education and prevention in place first, that’s why we’ve been so successful with keeping kids from smoking.”

Frank, a former school board member and former member of the Tobacco Evaluation and Review Board, said he wouldn’t have supported a Libertarian ‘legalization-without-regulation’ type of proposal either. He was not willing to compromise on decriminalization saying he thought it should be part of its own legislation and not part of what he viewed as an education bill.

After the defeat of the first amended version, Rep. Willem Jewett (D-Ripton), was quick to offer up the new aforementioned amendment, which moved all questions of legalization and decriminalization of home cultivation to the future study commission.  Those amendments were enough to sway Rep. Frank to change his vote, allowing the bill to pass the committee.

Although visibly disheartened, supporters of S.241 noted that as long as the bill moves forward in some capacity, it could eventually land in a joint ‘conference committee’ where three members of the Senate would join three members of the House to revise the bill before a full floor vote.

While her role as Committee Chair has been more focused on negotiating practical compromises than projecting her personal views, Rep. Grad was asked if she would be willing to support legalization again as a House member of a conference committee, or if she had drawn her own personal line in the sand with decriminalization. Said Grad, “I need to see what happens in the House, we did not pass a legalization bill.”

The final composition of such a committee would be left up to the leadership in the House and Senate, but would likely include the influential Senator Dick Sears (D-Bennington), who was rebuked by some legalization advocates for not going far enough in the original S.241, but who today looks to pot supporters more like Dr. Bronner than Dr. Evil.

The next step for the legislation is the House Ways and Means Committee, which includes seven Democrats, three Republicans, and one Independent. The opinions of the Ways and Means leadership are largely unknown, and party lines have not necessarily been a predictable indicator of the votes. It’s unsure what kind of decriminalization, legalization, or education bill might emerge (or die) in the coming weeks, but advocates will hope that now that it’s cleared the Judiciary, the grass will be greener down the hall in Room 34.