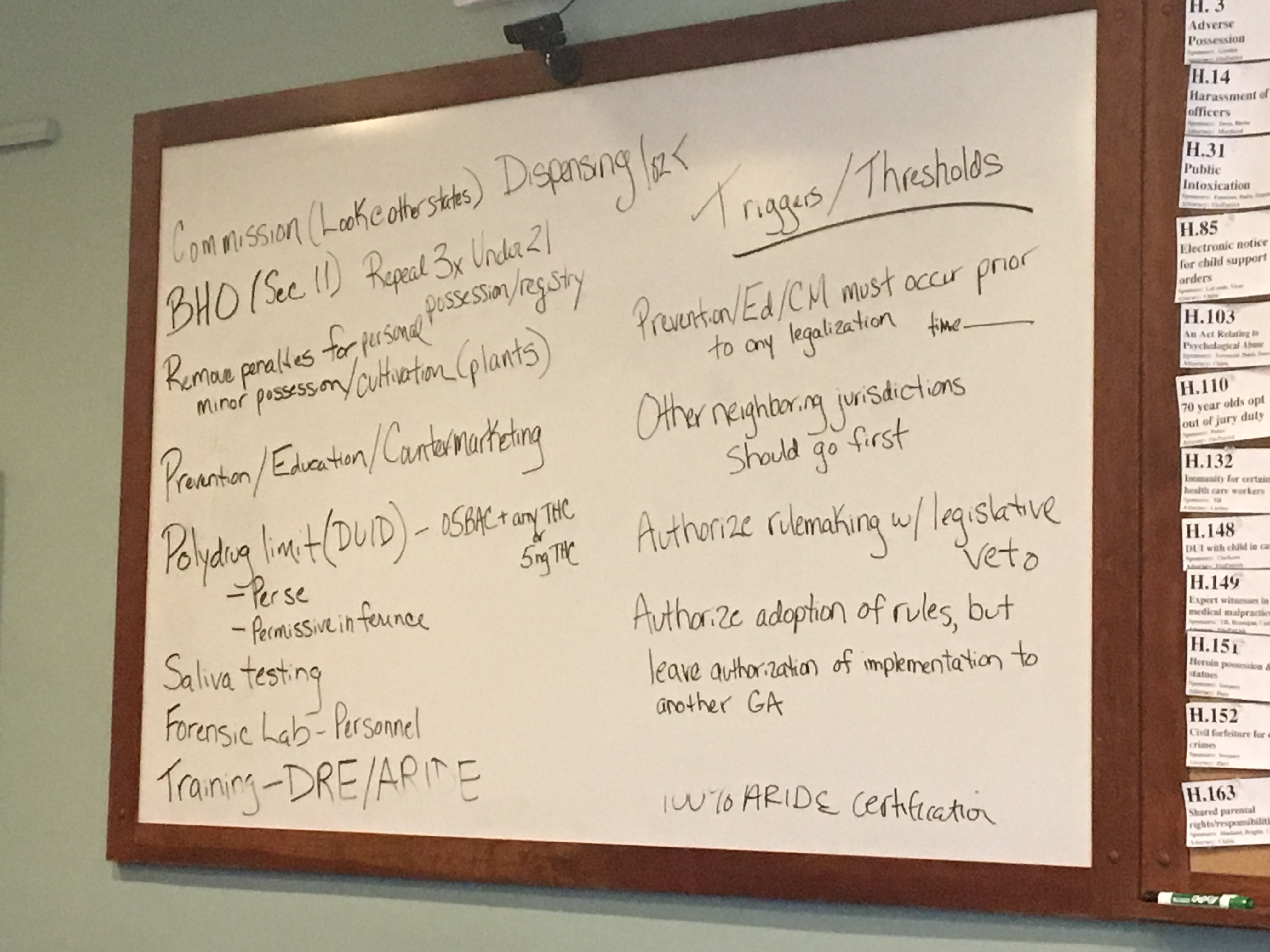 MONTPELIER, Vt. – From the start, there have been questions about how the House would react to the Senate and administration push to get cannabis reform moving forward this session. Those reactions became much more clear today, with the House Judiciary Committee indicating it will vote on Friday morning on a bill still called S.241, but that looks almost nothing like the original S.241 introduced in January, or the version passed by the Senate on February 25.  Even with these new provisions, the expected vote tomorrow morning will be very close with committee members predicting a 6-5 vote one way or another.

After multiple revisions – including stripping home grow and lounges, but adding more licensure – the Senate passed S.241 on February 25 with a 17-12 vote and landed in the House Judiciary Committee, where it remains. Many expected new amendments and revisions, but in an apparent attempt to unify the committee and move forward, Rep. Maxine Grad (D-Moretown) has moved to introduce a “strike all” amendment that would essentially eliminate all the previous provisions, including the ability to legally purchase marijuana in 2018.  Those new provisions would not allow for any legal sales of marijuana, but would decriminalize home grow, treating two plants of home grown the same as a decriminalized ounce.

The move caught members of the public by surprise, and drew the public ire of even S.241 supporters in the statehouse. In the comment section of a recent VTDigger article by Elizabeth Hewitt, Sen. Jeanette White (D-Windham), chimed in with her appraisal of the current situation:

Perhaps not a wise idea but I can’t help but comment. This bill will allow House members to say they have done something, appease the home grow people, without really doing anything. It spends all the money that was in the Senate bill without creating any source for the revenue. it creates new crimes without any scientific basis -driving with .05 with any trace, some House members have wanted to change the .08 for many years. It sets up a study, that was done. We paid Rand to do that and then Senate Gov Ops spent 4 months reviewing it and taking testimony. The Senate bill was in no way rushed. Very disappointing. Not only to the many who worked so hard on this issue but to the majority of the citizens of Vermont. The saying in Montpelier is if you don’t want to do something, create a study committee.

The divisions between the individual committee members were highlighted in a March 16 Seven Days article by Terri Hallenbeck, “A Divided House Judiciary Committee Ponders Marijuana Legalization Bill.” That piece indicates the committee’s general preference to collaborate and move bills along, but after three weeks of testimony, it’s still unclear if S.241 will even be voted by this committee, let alone pass and move forward.

In terms of scheduling, most expect action from the committee, to come tomorrow (Friday), affirmed by Committee Chair Maxine Grad who again indicated Thursday afternoon who said, “I’d be very disappointed if we can’t get a de-crim bill or a highway safety out of this committee.”

The most notable new addition is the re-introduction of home cultivation, which will still not be legal, but would apply the same civil decriminalization penalties for possessing up to two plants as possessing an ounce. Home grow harvests up to six ounces would be allowed to be kept at home provided they are stored securely. Rep. Willem Jewett (D-Addison) recommended a specific “frat grow” provision, which would be designed to prevent multiple residents of the same house to pool their growing capacity – clarified Rep. Jewett, “Ten people couldn’t be growing twenty plants in the same house.”

Overall, the committee appeared to run out of time and patience with further updates as the majority of the afternoon session was spent discussing potential revisions to Grad’s revised amendments. There were awkward moments of silence as representatives discussed how to balance the political intent of S.241 with complaints by both home grow advocates, and the vigorous opposition from law enforcement.

Some committee members discussed how to philosophically balance the financial penalties with a substance that’s being tacitly approved (albeit without legal protection). In discussing the possession fines, Rep. Barbara Rachelson (D-Chittenden) went even further saying that she wished the bottom penalties were lowered, maybe even to just a token five dollars, noting the intent of the legislation was not to increase the enforcement of marijuana, but to do the opposite and lessen the punishment of personal adult marijuana use.

Opponents disagreed and saw the questioning of the new provisions as opportunity to strip down the legislation even more. Said Rep. William Frank (D-Chittenden), “If we can’t decide between $5 and $200 for fines, there’s clearly disagreement in this committee, we should just put all decriminalization off to a commission.”

During the discussion, Rep. Charles “Chip” Conquest (D-Orange/Caledonia), who hadn’t necessarily intended to be supporting marijuana legalization this session, expressed the frustration at the complexity of the process and asked about getting the legislation down to the most fundamental aspects:

“Many people in Vermont smoke marijuana and will continue to do so, whatever we do here. The police are clear that they have more important things to do. We should just recognize that and say that an ounce or less and a plant is not illegal. I’ll vote that and we can stick with the existing penalties that we still have. That’s what we should make possible and skip all the other stuff.”

More than any conspiracy or inside baseball, marijuana reform advocates ultimately appear to be losing to legislator fatigue with the issue more than political disagreement. Speaking to each other in the chamber after the conclusion of the formal discussion, more than one member of the committee expressed their interest to ‘just vote tomorrow and move on.’

“We have to vote on something – whether anybody likes it or not, we’re past the 11th hour in my mind. It’s not an easy decision, it’s an important bill and it’s stressful, but at some point, whether it’s fortunately or unfortunately, it’s time,” said Rep. Tom Burditt (R-Rutland).

Even with the new version of the bill, passage by the Judiciary Committee is not guaranteed, with a roughly 6-5 split that could go either for or against the bill. Even if the bill does fail in the House, there are still possible scenarios that could allow for cannabis reform in 2016, namely through the Senate attaching some legalization provisions to some already-passed House legislation. Setting the stage for the rest of the session, tomorrow’s vote will surely bring movement on the cannabis question, but the direction of that movement remains to be seen.