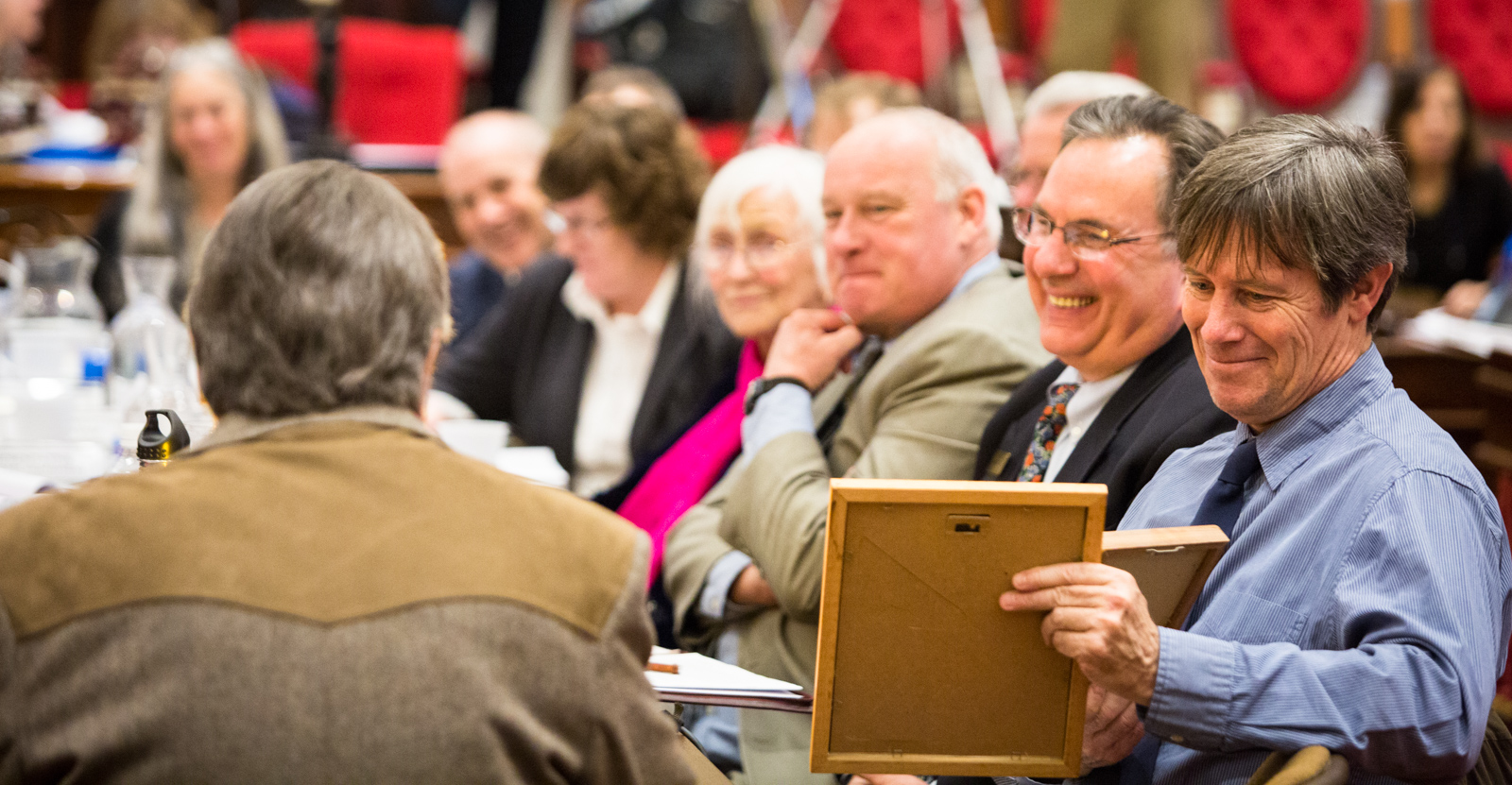 Member of the House Judiciary and Government Operations Committees listen to retired teacher Bruce Richards of Newbury speak out in favor of cannabis regulation at the Montpelier Statehouse public hearings on S.241 on Thursday, March 31 2016. by Monica Donovan for Heady Vermont.

MONTPELIER, Vt. — “Are you here for marijuana?” isn’t usually the first question one expects to hear from the Sergeant-at-Arms staff upon entering the Statehouse. However, the green jackets were appropriate attire for helping to coordinate what was one of Vermont’s largest and most direct public marijuana forums to date. The forum comes at a crucial time for the local efforts, along with increasing regional and national attention including the Washington Post wondering “How Vermont Could Change the Legalization Game” and Governor Shumlin touting the “enlightenment” of legalizing marijuana to Time Magazine.

With official sign-ups slated to begin at 4:30 p.m., supporters of S.241 spent their 4:20 lining up down a sizable portion of the first floor hallway, opposite their opponents and other undecided citizens registering to testify publicly to members of the House Judiciary and Government Operations Committees. In all, nearly 60 Vermonters signed up to testify, with the splits registering marginally higher than those tallied by the recent VPR/Castleton poll. Of those registered — all of whom had to choose between ‘pro,’ ‘against,’ or ‘undecided’ — the split was 34 pro (58.6%), 19 against (32.7%) and 5 undecided (8.7%). Figures within range of additional statewide pot polls from the past two years.

The public testimony came after a week in which both the House Judiciary and Government Operations Committees hosted joint sessions on Tuesday and Wednesday to hear testimony of experts from Washington and Colorado, Secretary of Agriculture Chuck Ross, three executive directors of Vermont’s four medical marijuana dispensaries, and the Commissioner of the Department of Health Dr. Harry Chen.

For the 100-plus members of the public who turned out Thursday — many of whom were seated in the House Chamber seats of those hearing their testimony — the event drew a few familiar faces, along with yet unheard-from Vermonters, many of whom considered this their last chance to make a public appeal.

Chris Ginnon of Wallingford spoke to the lack of  protection for home growers in both the current decriminalization status and the criminal penalties proposed S.241. He recounted his own personal experience: He said that his son’s friend had thrown a marijuana seed into his spider plant in his small Wallingford greenhouse. According to Ginnon, that single plant snowballed into a seven-page court decision that ultimately led to a judgment of ‘no judgment.’

“Current Vermont statute now states, a person convicted of cultivating marijuana — and that is any marijuana — shall be imprisoned not more than two years and not fined more than $3,000 … Two years in jail and a $2000 fine for growing one marijuana plant in my own home, in my own property—that’s really the law of the land here?  We’re talking about making it legal now, but leaving that aspect of the law unchanged, it just don’t make sense,” he said.

Ginnon received applause from the many home cultivation advocates in the chamber, including several from Windham County and the grassroots volunteer group Vermont Home Grow, who maintain an active Facebook page and website. One of their leaders, Rick Veitch, testified and expressed his frustration with the changes enacted by the Senate Judiciary Committee from the original S.241, which he supported.

“Two years in jail and a $2000 fine for growing one marijuana plant in my own home, in my own property—that’s really the law of the land here?”

Veitch also discussed regional implications and longingly talked about the ballot initiative in Massachusetts that is widely expected to pass. “This citizen initiative allows for generous home grown cultivation, it does not create a state-regulated monopoly or the ensuing bureaucracy. It does not provide new funding for Massachusetts police,” he said. “And importantly, it calls for a tax rate that is less than half of what S.241 does—in other words, marijuana purchased across the border in Massachusetts will be considerably less expensive than that sold in Vermont under S.241.”

Veitch continued by comparing this cheaper Massachusetts marijuana market scenario to the tax-free competition from neighboring New Hampshire. “We’ve all seen the economic devastation on our eastern border towns created by bad state tax policy. One hopes that we can learn from these tough lessons,” he said.

Opposition brought new faces to testify as well — many wearing familiar blue uniforms — including James Roy, a 31-year veteran of Vermont law enforcement and one of the state’s drug recognition experts. “Law enforcement has seen a trend in Vermont’s highway fatalities in which drugged driving related fatalities are now three to one over alcohol fatalities.”

He also addressed opiates — one of the few times in the evening it was brought up by opposition — specific to their impact on driving and stated that, “In regards to Vermont’s opiate crisis, cannabis still shows up more in impaired driving events than does heroin or any of the other opiate products.”

“Look in the mirror and be honest with the children, it’s okay, you’re not gonna turn out rotten and soda pop, Mountain Dew, diabetes, cigarettes, alcohol has killed more people than anybody else.”

For the most part, the forum moved quickly and efficiently, with members of the public (mostly) maintaining the respectful decorum in the chamber. That stayed consistent throughout the night save for the testimony of Paul Reis, a Bellows Falls resident and self-described “straight shooter.” Reis mentioned he knew plenty of teachers and even a few police chiefs who had smoked marijuana and turned out fine before crescendoing by asking legislators to “Look in the mirror and be honest with the children, it’s okay, you’re not gonna turn out rotten and soda pop, Mountain Dew, diabetes, cigarettes, alcohol has killed more people than anybody else.”

One retired teacher spoke in support of legalization, but there were also several current high school students who bravely testified to the committee about attitudes in their schools. Students from Montpelier High School spoke in support of S.241, by sharing the results of a school-wide poll conducted as a class project. That poll apparently showed legalization would not increase the likelihood of their peers using marijuana.

Burlington High School was also represented by three students from a high school health class, all of whom spoke in opposition to S.241.  Two young ladies (names withheld due to minor status) performed an impressive spoken-word poem in tandem, virulently denouncing legalization. They were preceded by a third student from BHS, a young man who read an original verse he had written titled, “One step in the future taken, consider this one step back” and included the following stanza:

“Minimum wage we trapped in this cage/Life is a book and you not stuck you just hooked/Looking in contemplating ways/For the next time you could blaze/How you get through the chapter, you not focused on the page…”

After about 90 minutes, there were no members of the opposition left to speak. Supporters took turns sharing different messages and angles of support, including business owners ranging from innkeepers to horticulturalists to Jonny Adler, one of the owners of the Skinny Pancake. Adler, who also identified a parent, pushed urgency:

“So many careers are ruined because of cannabis prohibition, it’s a professional catastrophe.”

“On the idea that this can wait, it cannot wait. I would like you to tell a beloved school teacher from Burlington whose career was needlessly ruined because he got caught with a small amount of marijuana that it can wait. Tell the parents of those kids who lost that teacher that it can wait—imagine if such a penalty came from being caught because you were caught drinking a beer. So many careers are ruined because of cannabis prohibition, it’s a professional catastrophe.”

Much of the future of the bill rests with Central Vermont politicians, including Speaker Shap Smith (D-Morristown) and Rep. Maxine Grad (D-Morristown), who chairs the House Judiciary Committee and who told VTDigger reporter Elizabeth Hewitt that she’s still undecided and her committee could take up the bill next week.

*This story has been updated as of 4/2 with audio testimony. Members of the public or the press who would like access to the full two hour audio recording can email news@headyvermont.com to request a dropbox link.*