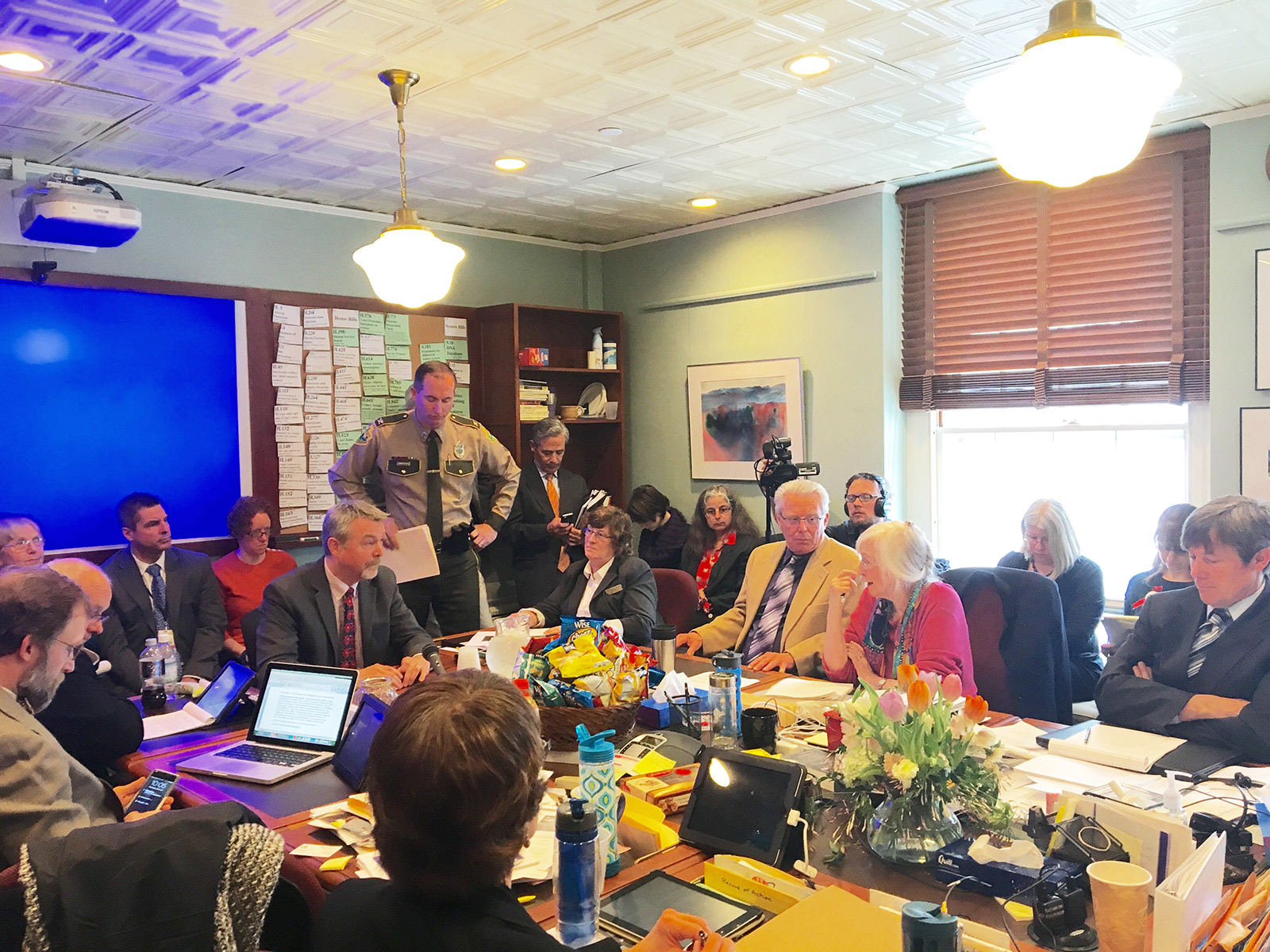 MONTPELIER, Vt. — To stay updated and keep an eye on the evolution of the conversations happening at the statehouse, Heady Vermont editor, Eli Harrington spent the day in Montpelier observing and documenting the testimony at the House Judiciary committee, where S.241 currently resides.

Please note that thanks to the work of the legislative council at the State House and the committee staff, the testimony schedule and supporting documents (even separated by day) are all available online on the website for the House Judiciary Committee (left side, “Documents & Handouts“). So in addition to the testimony updates here, anyone with an internet connection – including the representatives themselves – has access to the information that’s being referenced here.

8:30: Question to former Chief Schirling: “Are you saying that people working for the state are under a gag order?”

9:41: “Make no mistake, the black market fuels the black market of other drugs. The analogy I’ve often used is, you’re in the convenient store business – coffee is that simple thing that makes you the money that allows you to re-build those stores … marijuana drives profits which drives the ability to invest in other things.”

Colonel Matthew Birmingham of the Vermont State Police clarified his perspective, noting that he speaks for the state police troopers and not the larger Department of Public Safety. His full testimony talking points online here.

Dir. of State Police, Cpl Birmingham distinguishes he speaks for enforcement not his boss or DPS #vtpoli #marijuana pic.twitter.com/AVQLRVB7Lr

4:30: “So if you break user groups into three categories, you have Vermonters now, who smoke marijuana, I believe the RAND Report indicated it were approx 80,000 individuals who buy marijuana monthly. They are either driving impaired on our highways today, or they are not. Their behavior is not likely to change under legalization…”

Back to #marijuana testimony, now @MarijuanaPolicy starts by citing @Harpershttps://t.co/kys9ElIGxP#vtpolipic.twitter.com/dUp7c3UvRJ

*Note: Audio starts roughly one minute into the presentation, Simon is referring to the data presented by previous speakers which comes from the Rocky Mountain High Intensity Drug Trafficking Report. He is noting that these studies are federally-funded and mandated, by law, to discourage any legalization or reform of marijuana policy.

Part I: 2:00 “I think de-criminal is a very commendable reform, but I think it was a half-measure from the beginning. It did not answer the question, ‘how should marijuana be produced and sold, and by whom,’ that’s what we’re here to look at now…”

Part II: “But to say that the marijuana of today is in any way a different drug or apples and oranges from what was available in the 70’s is, I think is, wrong. There’s actually an advantage to having a more potent product which is that you need to smoke less of it to get the same effect … The other key point is that in a regulated market, consumers can know what they’re getting and will know what the THC content is. Some consumers want less THC…”

*Note: Between the introduction and start of testimony, committee members are discussing a different amendment. The witness’ testimony starts at 2:08…

Certainly not least, Beau Kilmer, one of the authors of the RAND Corporation study published in 2015 to study the impacts of legalization in Vermont, testified via phone. Also read, “Considering marijuana legalization carefully: Insights for other jurisdictions from analysis for Vermont.”

*Note: Other committee members not pictured (Burditt, Strong, LaLonde, Viens) did join for parts of the presentation, however the post-lunch testimony did not receive the same attention or attendance as the morning sessions.