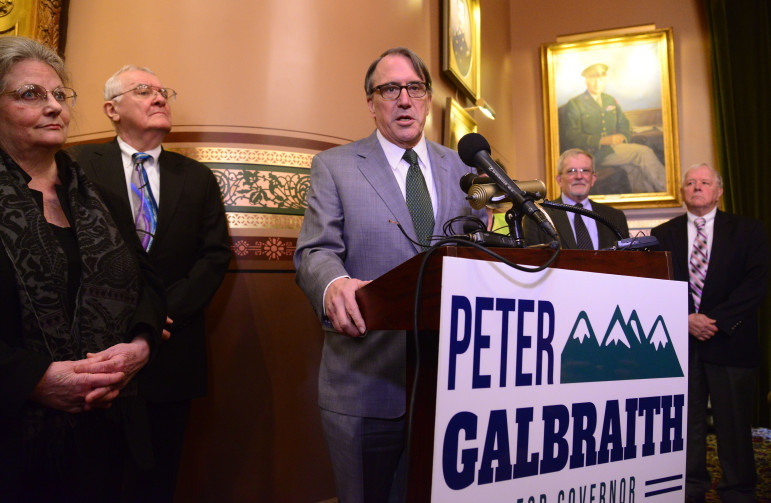 via VT Press Bureau - Stefan Hard Peter Galbraith announces his candidacy for governor Tuesday in the Cedar Creek Room of the State House in Montpelier.

MONTPELIER, Vt. – The major #vtpoli news of the week was the emergence of familiar faces in Vermont politics joining their respective races, each of whom would be making a significant political leap if elected. One of them is Peter Galbraith, the former ambassador and Windham County senator who is seeking the Democratic nomination for Governor. Galbraith will face off against Dems Sue Mintner and Matt Dunne, both of whom conditionally support S.241. The stated priorities of Galbraith’s campaign are working against special interests in Montpelier, fighting large scale wind projects on Vermont ridge lines, and a generally Progressive agenda a la #FeelTheBern. So what does Galbraith think about Mary Jane and S.241?

“I support legalization in a manner that keeps it out of the hands of minors and ensures the safety and quality of the product. Licensing decisions should be based solely on these criteria and not to give any producer a commercial advantage. I also support the right of Vermonters to grow any legal product for personal consumption. Legalization shouldn’t be another giveaway to corporate special interests. I would like the senate bill amended along these lines. If a satisfactory bill is not enacted this session, I will propose one as Governor.”

That statement comes from Galbraith’s campaign directly, and with explicit support and a stated interest in updating S.241 to allow for personal cultivation (homegrown) to cut out commercial interests, distinguishes him from his competitors in the Democratic nomination, Matt Dunne and Sue Mintner, who both also support S.241. In the past, he hasn’t been known for playing nice in Montpelier, and didn’t win any praise from his fellow former Windham County Democrat, Jeanette White, who is a co-sponsor of S.241. For more about Galbraith, tune in to Vermont Public Radio at 12:00pm on Friday, March 25.