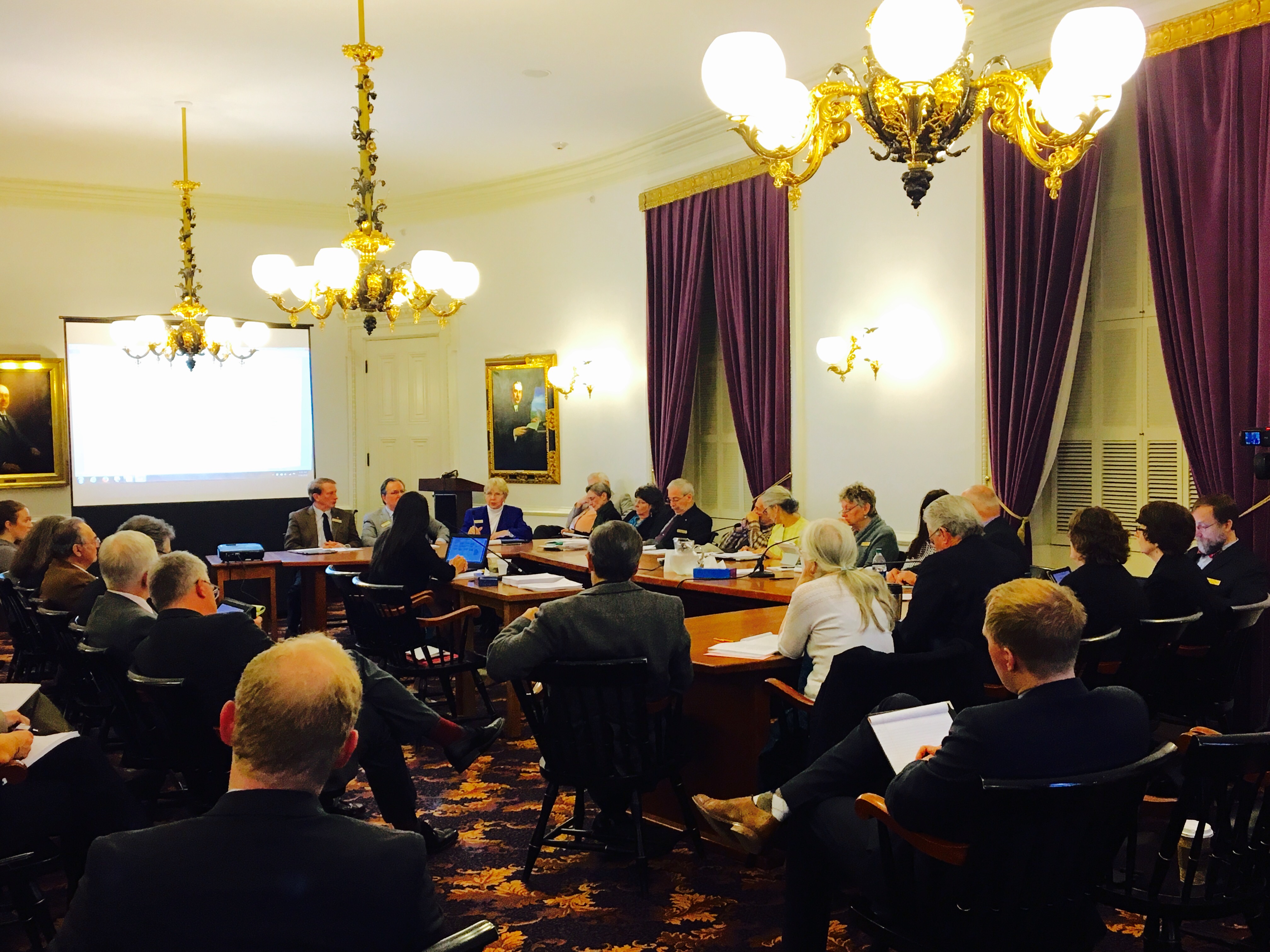 Members of the House Judiciary Committee, Government Operations Committee, and other individual representatives discuss the existing 241 marijuana legalization bill provisions with a member of the Legislative Counsel in Montpelier, Vermont on Wednesday, March 16, 2016. By Eli Harrington for Heady Vermont.

MONTPELIER, Vt. — For Vermonters interested in how S.241 will be received in the House, the first day of the Judiciary Committee discussions offered both a whiff of things to come and some familiar phrases and fragrances.

The hearing was kicked off by Rep. Chris Pearson (D/P-Burlington), who’s been a consistent and vocal advocate for cannabis reform and sponsored marijuana legalization in 2015 (H.277). Rep. Pearson has even previously proposed legislation to enact alcohol prohibition, as a nod to the legal status of cannabis. “If you think what we’ve been doing with marijuana prohibition is working, you’re probably not going to support this bill, but many of us don’t think it’s working,” he said. He also suggested marijuana should be considered more like alcohol and tobacco – not healthy, but controlled – versus lumped in with harder drugs like heroine and cocaine.

The legalization topic itself is one that continues to invite great interest both from citizens and legislators, 20 of whom (from the House Judiciary, Government Operations, Agriculture and others) gathered to review and parse S.241 as passed by the Senate in late February. As has happened with previous hearings, a larger committee room was employed to accommodate the larger-than-usual crowd of citizens that included representatives from Vermont Cannabis Collaborative, the Vermont Cannabis Trade Alliance, Vermont Home Grown, SAM-VT and a few well-heeled lobbyists and employees of the administration.

But even though they’re just starting to focus in on S.241 under the House parts of the Golden Dome, there’s been no lack of strong feedback from legislators.

Rep. Burditt’s personal and political views highlight the complexity of the issue for the many Vermont representatives who will consider the various factors and factions over the coming weeks.

When asked if he’s heard from any libertarian constituents or lib-leaning republicans (such as Senator Joe Benning, one of the co-sponsors of S.241), Rep. Burditt spoke for both himself and other republicans with more angular affiliations.

“I consider myself a libertarian, and a libertarian viewpoint is just legalize it on one hand. On another hand, a libertarian wouldn’t want to raise taxes and create a whole new bureaucracy and new boards. The question has been brought up at some libertarian type meetings: Okay, what do we do in this situation?”

The morning session itself went from 9 to 11:30 a.m. and moved quickly, with Legislative Counsel staff explaining the existing provisions in S.241 as passed and doing their best to respond to other questions raised by members of the house.

One of the most prominent questions: Where would cannabis consumers be legally allowed to actually consume cannabis? Others wondered what other states debating legalization are considering, and how the black market has been impacted in states with recreational markets.

For the first time publicly, Rep. Vicki Strong (R-Orleans/Caledonia) wondered (and suggested) aloud if legislators would be banned from participating in a cannabis business. When asked if her concerns were specific to potential ganja-preneur legislators and the cannabis question, or more of a general concern, she clarified.

“Just in the sense of it’s a conflict of interest for us to pass anything where we could profit from it financially or have it become a business – we’ve had it happen here already. People leave this building and get jobs right off the bat.”

For Debbie Haskins, the head of SAM-VT (the statewide group that opposes legalization) and an opponent of the marijuana bill, her approach to protesting the legislation has also evolved, and she found some common ground with at least one of the homegrowers at the meeting. She acknowledged, “Nobody wants kids to get it, and the belief system that we’re going to stop kids from getting it, whether we legalize or not, is not possible, and that’s an issue for us.”

But for Haskins, the increasing complexity and scope of the questions being raised are huge factors, and reasons the legislation should not be passed. “This issue keeps becoming more complex every time I hear people talk about it – what do we do with the illegal money, what do we do with the people coming in and getting it, where are people going to smoke it,” she said.

Rep. Joanna Cole (D-Burlington) says that she’s hearing from a lot of constituents on both sides, but mostly people who want it to be regulated. She acknowledges that she represents Burlington where support is high; However, she also shares insight into where she sees a disconnect in the discourse.

“Sometimes they [opponents] don’t realize that there will be a safer product; that the distribution, if we’re tracking it, will be safer. We want there to be less driving under the influence – right now we have our blinders on and people aren’t being taken off the road. This legislation will help take impaired drivers off the road.”

Just like the hazy weather driving down I-89 this morning, which limited visibility to a few hundred yards, there’s plenty of fog to burn off before a clear picture emerges. Expect more clarity as the process continues, but for the first day, Rep. Burditt’s perspective sums up how many are feeling about the prospects of S.241 and legalization in general.

Read More: Summary of the bill that the House Judiciary Committee reviewed and discussed