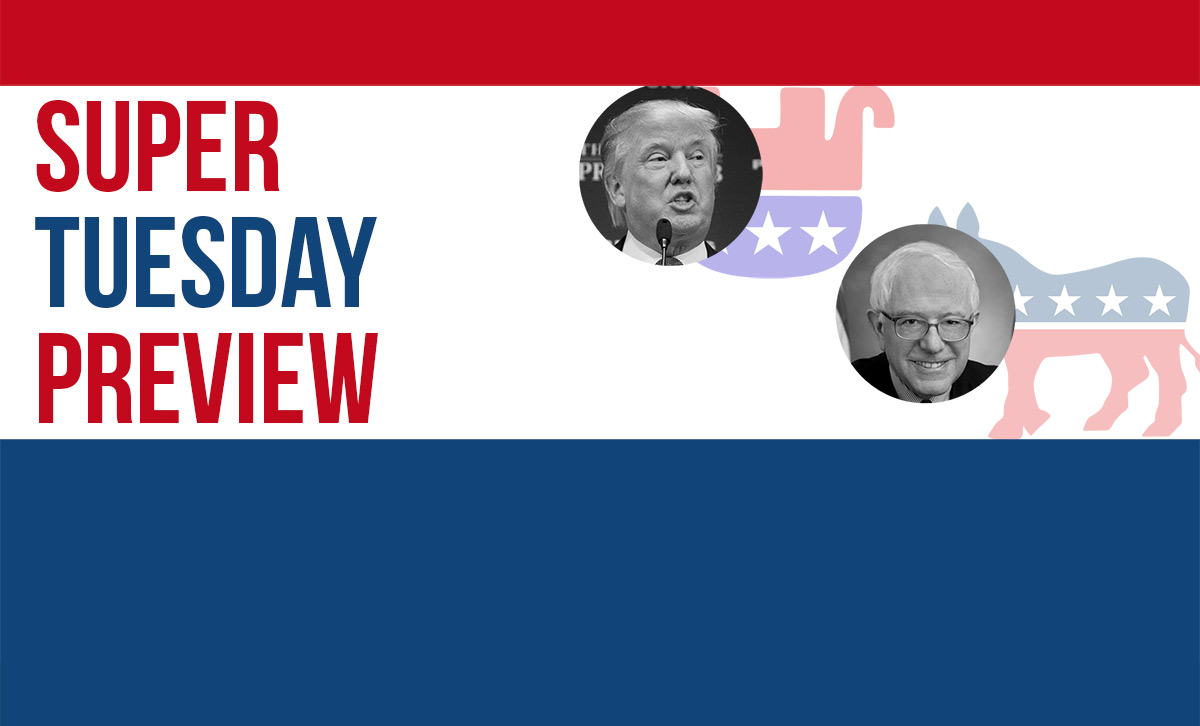 BURLINGTON, Vt. — It’s a big week for Vermont. Hot on the heels of last week’s state final Senate 17-12 vote in favor of marijuana regulation, Vermonters are heading to the polls tomorrow to cast their votes in the U.S. Presidential Primary. Super Tuesday coincides with Town Meeting Day, which will find residents gathering across the state to discuss everything from school budgets to chicken farming to Vermont Yankee.

This is the first year that Vermonters were able to register to vote online. The new system allows residents to register to vote, check registration status, request an early or absentee ballot, locate polling locations and view sample ballots.

“This is sure to be a great Town Meeting Day – a Vermont tradition which has taken place for over 200 years,”  Secretary of State Jim Condos said in a press release. “The addition of this year’s Presidential Primary, with a Vermonter on the ballot, brings extra excitement to this Town Meeting Day and we are expecting a large voter turnout. We are proud of our tradition and the strong communities it has helped build in Vermont.”

A VPR poll released last week, which put questions to 895 respondents via both land and cell lines throughout Vermont, quizzed respondents on the elections, marijuana and more. The majority, 55%, said they favored marijuana legalization, while 32% were opposed.

Finally, the VPR examined the demographics most enthusiastic about legalizing: men (55 percent “very strongly” favor legalization) in southern Vermont (51 percent) between 18 and 44 (51 percent) who don’t consider themselves Republican, Democrat or Independent (55 percent) and haven’t been educated beyond high school (53 percent).

Curious about your preferred candidate’s stance on legalization? Here’s a roundup of the top ballot picks and their views on pot.

Democratic Nominees
Among the likely voters, Sen. Bernie Sanders is by and large the favorite on the Democratic ticket, with 77.9 percent in favor. The VPR poll found Clinton trailing behind with 12.8 percent.

Bernie Sanders
Sanders has gone on record saying that if he were a resident of a state voting on legalization of marijuana, he would vote yes.

The Vermont senator has frequently tied the issue of marijuana legalization to criminal justice reform, highlighting the failed policy and enforcement of the “war on drugs.” He has expressed support for allowing states to legalize and regulate marijuana for adult and medical use.  He has expressed some concerns about regulating marijuana for adult use, which stem from his concerns about other illegal drugs.

Besides supporting the end of the federal prohibition on marijuana as part of his campaign platform, Sanders is co-sponsoring the Marijuana Businesses Access to Banking Act of 2015 to immediately remedy the current situation by ensuring access to banking services for legitimate businesses. In November, he introduced the Ending Federal Marijuana Prohibition Act, which would remove marijuana from the federal drug schedules and ensure states are allowed to regulate it similarly to how they are allowed to regulate alcohol. It would also allow marijuana businesses to access banking services and apply for standard tax deductions that currently are not available due to federal marijuana laws.

When asked how he would vote on a statewide ballot initiative to legalize and regulate marijuana for adult use: “I suspect I would vote yes. And I would vote yes because I am seeing in this country too many lives being destroyed for non-violent offenses. We have a criminal justice system that lets CEOs on Wall Street walk away, and yet we are imprisoning or giving jail sentences to young people who are smoking marijuana. I think we have to think through this war on drugs which has done an enormous amount of damage.” 2016 Democratic Presidential Debate, October 13, 2015

“The state of Vermont voted to decriminalize the possession of small amounts of marijuana and I support that. I have supported the use of medical marijuana. And when I was mayor of Burlington, in a city with a large population, I can tell you very few people were arrested for smoking marijuana. Our police had more important things to do. Colorado has led the effort toward legalizing marijuana and I’m going to watch very closely to see the pluses and minuses of what they have done. I will have more to say about this issue within the coming months.” Reddit AMA, May 19, 2015

Former Secretary of State Hillary Clinton seems to have changed her mind when it comes to marijuana policy, according to National Journal. Clinton had previously expressed that she did not want marijuana decriminalized, but thought research ought to be done into its benefits. Hillary, while agreeing that medical marijuana offered clear benefits, stopped short of making an endorsement, saying, “I think we need to be very clear about the benefits of marijuana use for medicinal purposes. I don’t think we’ve done enough research yet.” To that effect, she supports the downgrading of marijuana to a Schedule II drug to allow more medical research.

When she came to the issue of whether it should be legal for adults to use, Clinton said that states like Colorado and Washington have already reformed and that they are “laboratories of democracy.” Clinton claims to be holding out on forming her opinion until she has the evidence from the two states. Her change of heart mirrors that of the Democratic Party, which, as of late, has become more amenable to the case for making marijuana legal for adults to use, medically or otherwise.

Clinton said on MSNBC on October 14, 2015: “I really believe it’s important that states like Colorado lead the way, so that we can learn what works and what doesn’t work. And I would certainly not want the federal government to interfere with the legal decision made by the people of Colorado, and enforced by your elected officials, as to how you should be conducting this business that you have approved. So, no, I want to give you the space and I want other states to learn from you, what works and what doesn’t work.”

Republican Nominees
Expect the Republican ballots to be a bit more crowded than their Dem counterparts. Trump is forecasted to do well in Vermont on Tuesday: VPR’s poll shows him leading in Vermont with 32.4 percent, followed by Rubio with 16.9 percent, Texas Sen. Ted Cruz with 10.5 percent and Kasich with 10 percent.

In 1990, Trump said he favored legalizing all drugs, but more recently he has said he opposes legalizing and regulating marijuana for adult use.

He supports legal access to medical marijuana, and he believes states should be able to set their own marijuana policies with regard to adult use.

“In terms of marijuana and legalization, I think that should be a state issue, state-by-state. … Marijuana is such a big thing. I think medical should happen — right? Don’t we agree? I think so. And then I really believe we should leave it up to the states.” Washington Post, October 29, 2015

Sen. Rubio has expressed minor support for allowing the use of non-psychoactive forms of medical marijuana, but he is vehemently opposed to the legalization of marijuana for adult use. Earlier this month, he said, “There’s no positive impact to using marijuana,” and that if it has medical benefits it should be taken to the FDA for approval.

He has equivocated in his support for letting states establish their own marijuana. In April 2015, he said he believes federal prohibition laws should be enforced in states that have repealed state prohibition laws.

When asked why he doesn’t support legalizing marijuana for adults: “[B]ecause this country already pays a terrible price for the abuse of alcohol. We’re not going to outlaw alcohol. We’re not going to ban it. It’s part of our culture. It’s ingrained in our society — that’s not a realistic proposal. But no one can tell me that alcohol’s had a positive impact on society. It destroys marriages and lives, it kills people … and now you want to add another intoxicant and make it legal? There’s no positive impact to using marijuana. Now, if there’s a medicinal use — if you can go to the FDA and prove that it helps with medicine, that’s fine. Then turn it into medicine. … There is no responsible way to smoke marijuana repeatedly. There’s nothing good about it.” Washington Times, February 11, 2016

At the 2015 Conservative Political Action Conference, Sen. Cruz said he is opposed to the legalization of marijuana for adult use, but he believes states should have the right to establish their own marijuana policies.

Previously, the senator had criticized the Obama administration for not enforcing federal marijuana laws in Colorado and Washington after voters in those states adopted laws that regulate and tax marijuana similarly to alcohol.

“That’s a legitimate question for the states to make a determination. And the citizens of Colorado and Washington State have come to a different conclusion. They’ve decided that they want to legalize it. I think it is appropriate for the federal government to recognize that the citizens of those states have made that decision. One of the benefits of it … is we can now watch and see what happens in Colorado and Washington State.”  Hugh Hewitt Show, April 16, 2015

“I actually think this is a great embodiment of what Supreme Court Justice Louis Brandeis called the laboratories of democracy. If the citizens of Colorado decide they want to go down that road, that’s their prerogative. I don’t agree with it, but that’s their right.” Conservative Political Action Conference, February 26, 2015

Gov. Kasich has said he is “totally opposed” to marijuana legalization, including the use of marijuana for medical purposes. At a town hall in February 2016, he said, “Medical marijuana, I think we can look at it.”

He believes states should “probably” have the right to establish their own marijuana policies and would not challenge state laws regulating marijuana for medical or adult use.

When asked about states that have adopted laws making marijuana legal for adults: “The people in those states have voted that way. The federal government has decided to kind of look the other way. I feel very strongly in my state, I’m going to oppose, and they’re going to put something on the ballot to legalize drugs. I’m totally opposed to it, because it is a scourge in this country. Now I would have to give it thought as to, I probably would not from the standpoint that the states have gone forward to prove that. I haven’t thought about this. I’d have to give it a little thought. … In my state and across this country, if I happened to be president, I would lead a significant campaign down at the grassroots level to stomp these drugs out of our country.” HughHewitt.com, April 21, 2015

“On medical marijuana, doctors that I know tell me we don’t need that, there are other ways to [treat pain].”OhioCapitalBlog, March 30, 2012

Get out and vote!

Polls open between 5 a.m. and 10 a.m., depending up the town. All polling places close at 7 p.m. Find out more about how to vote here.